Push & Pop: 8 Common Scenarios Where TheOptimizer Will Do a Better Job Than You

Partner
There are tens and hundreds of follow alongs where many affiliates struggle with keeping a systematic approach to their Push and Pop/Redirect campaigns optimization.

As a matter of fact, keeping a close eye to so many moving parts of a campaign is not that easy, so quite often we loose track of them.

To give a bit more context on how the latest update of TheOptimizer Mobile helps you get your optimization back on track, I’m going to go over a few frequent scenarios that we tend to maybe neglect or fail to follow through. End result, we loose more money than we should.

#1 – Testing New Offers Without Loosing Huge Budgets on Hopeless Ones

Scenario: You want to test as many offers as possible in order to find some winners and put them on a separate campaign that you can scale and generate profits from. However, you end up overspending on some of them with the hopes that it may convert on the extra spend, but most likely it doesn’t.

Inefficient approach: Take a strict and systematic approach to your testing strategy. E.g. 10x offer payout testing budget to see if it converts at all, or maybe reaches a minimum negative roi that you can work on. Again, this requires lots of time in monitoring and optimization.

Efficient approach: Create an auto-optimization rule that monitors your test campaign ad spend in relation to your average offer payout. And in case you have no historical conversion data for the new offers, you can always set a fixed payout to your campaigns on TheOptimizer Mobile. 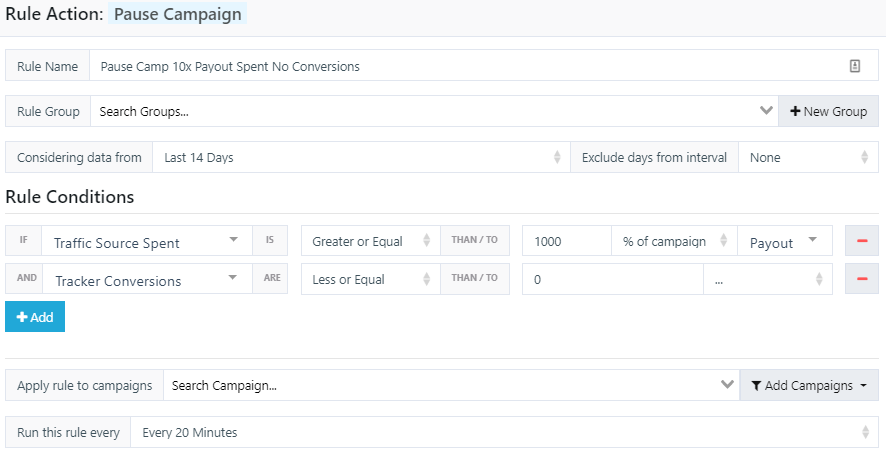 Scenario: Almost every one of us has already dealt with publishers that just generate impressions, or clicks (on push campaigns), without generating a single click or conversion. The end result is that we may have spent maybe over 20% of our testing budget on a single publisher, while there are hundreds if not thousands of them.

Inefficient approach: You need to either block these types of publishers immediately or if allowed by the traffic source, drop their individual bid drastically.

Efficient approach: Create a simple auto-optimization rule where you continuously monitor the performance of your campaign publishers – as often as every 10 minutes – then block or drop the bid if any reaches the rule thresholds. 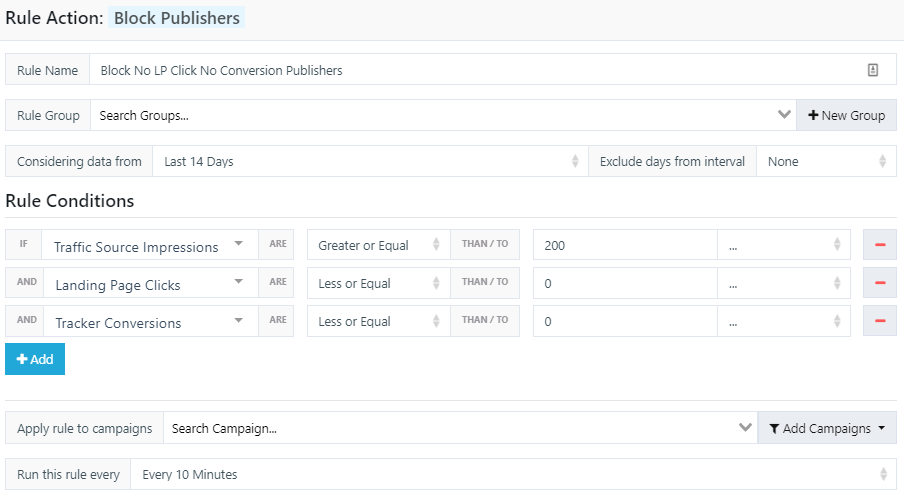 Scenario: You set a daily budget to your campaigns which should normally be aligned with your offer payout, number of campaigns, as well as your personal ad spend capacity. But instead of having your daily budget evenly distributed among publishers, most likely a single publisher has spent like 10% - 20% of it right in the first hours of having your campaign running.

Inefficient approach: Ideally you need to stay on top of your campaign publishers and hit refresh on your traffic source and tracker every minute to spot such publishers and block them. Thing which is not very effective, since when running multiple campaigns, it’s virtually impossible to check all of them at the same time. Plus, you end up not having time to take care of the other stuff you need to.

Efficient approach: Create an auto-optimization rule that monitors your publisher daily spend while comparing it to your daily budget. This way if any of your campaign publishers spends like 15% of your daily budget without generating a single click on the landing page or conversion, gets blocked.

Scenario: Your plan is to block any non-converting publishers of your campaigns once they reach the equivalent of 2x the offer payout in ad spend. But, having multiple campaigns running at the same time as well as various offer payouts, it becomes difficult to follow through and cut publishers accordingly.

Inefficient approach: Plug multiple monitors on your PC then refresh multiple browser windows (a campaign each) in order to spot and block publishers that reach 2x the offer payout without conversions.

Efficient approach: Create an auto-optimization rule that monitors your campaign publisher’s ad spend in relation to your offers. It will also use the average payout of a conversion using historical conversion data, in case you have variable payouts.

Scenario: Like when blocking publishers at 2x payout without conversions, you may want to save some bucks and block any of them that does not generate a single landing page click at 1x the offer payout ad spend.

Inefficient approach: Pretty much the same as if you were to block a publisher at 2x payout without conversions. You need to spend much of that time that you don’t have monitoring stats.

Efficient approach: Create an auto-optimization rule that monitors and blocks any publisher that spends 1x the offer payout without generating a single landing page click and conversion.

Scenario: To make sure you are using your best possible ads for your push traffic campaigns you need to split-test many of them for your campaigns. A good approach would be to test your ads at around 5x your offer payout before pausing them. But most of the time your ads may spend more.

Inefficient approach: Continuously monitor ads on multiple campaigns and manually pause any of them that has reached the 5x offer payout in ad spend without generating any conversion.

Efficient approach: Create an auto-optimization rule that will continuously monitor your ads 24/7 if they have reached their ad spend threshold without any conversion.

Scenario: If you’re just starting out with Push and Pop traffic, you may be in that phase where you struggle with finding the right bid for your campaign. Even if you’re well experienced, you could have so many running campaigns that it could be virtually impossible to accurately monitor all of them and set the right bids.

Inefficient approach: Jump back and fourth from your tracker, to the traffic source, make calculations on an excel spreadsheet, then apply the new bids.

Efficient approach: Create an auto-optimization rule where you can periodically (according to your needs) tweak bids based of your earnings. E.g. Set CPM to XX% of your EPM – aiming to maintain a fixed profitability ratio. 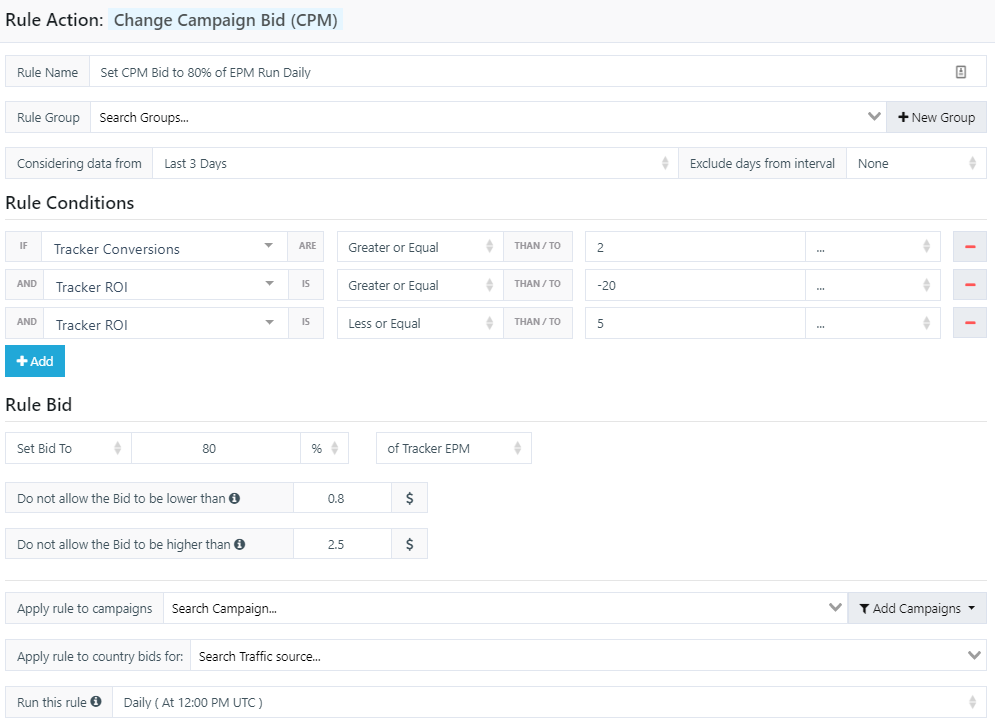 #8 – Scale Up Campaigns on Profitable Days

Scenario: Even when you find a winning offer, it doesn’t mean that it converts the same every day. In fact, some days you may want to spend just a little to keep the offer running, or just pause the campaign for that day.

Inefficient approach: Monitor campaigns like 24/7 (taking in consideration the time zone difference) and manually scale up your budgets to make sure your campaign spends and converts as much as possible.

Efficient approach: Create an auto-optimization rule that will automatically scale up your daily budget multiple times a day if your campaign ROI is within the goal threshold. 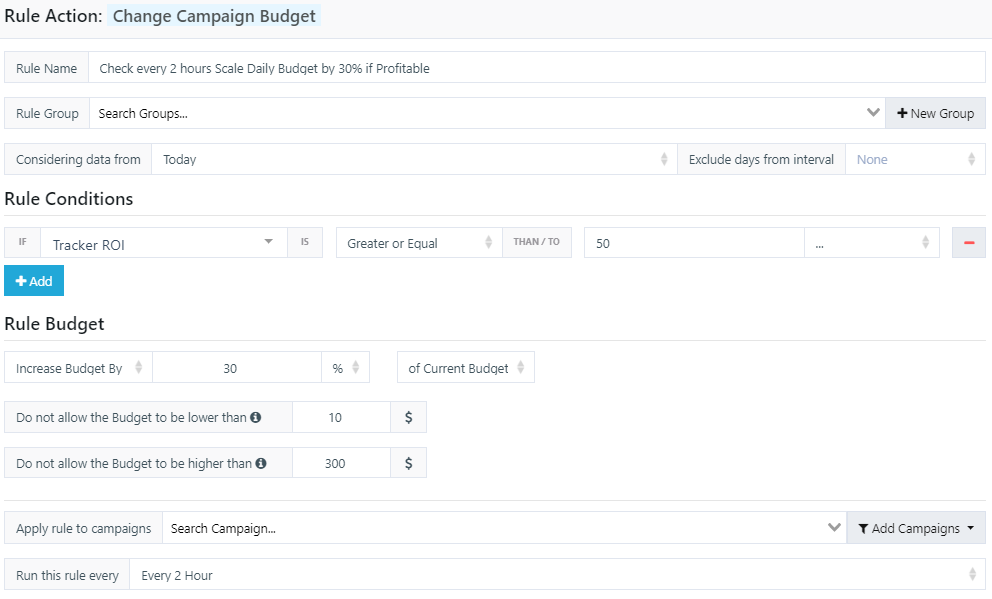 Obviously these are just a few common use cases that can be better addressed using auto-optimization rules. So if you have a specific use case that you want to take a more efficient approach to, feel free to described it in the comments below and go over it together.

I’ve been using TheOptimizer with Bemob & Propellerads for about a month now and at $99 a month I think it’s great value.

Super easy to use and when you get to bigger ad spends it acts like a “stop loss” and it begins to pay for itself.

It can be a little slow to pick up my campaigns for me to add rules too and the email alerts didn’t provide me with zone id’s.

Those 2 points would really improve an already great tool

benkingldn said:
It can be a little slow to pick up my campaigns for me to add rules too and the email alerts didn’t provide me with zone id’s.

Those 2 points would really improve an already great tool

12 Reasons to work with a tracker