I did not run any campaigns while I was on my recent vacation so i am ready to get some traffic going. I have some funds in PropellerAds and I want to continue testing offers from Monetizer.

I'm using onclick pops SmartCPM bidding. I am setting my default campaign bid at the recommended bid to get as much traffic as possible for the initial test while my optimizer tries to find winning ZoneIDs.

Few things about the optimizer:
So, within the 5x spend, I am hoping to have many zones with conversions. Then, the campaign runs based on the performance of those zones essentially.

I'll let you know how it goes

We're off to the races. All 3 campaigns were approved and are receiving impressions. The $ next to the campaign name is the current bid. Everything else should make sense. I will post an update tonight hopefully with some conversions

Nice one luke.. let me get my popcorn..

Eagerly waiting for the next update

Also, are you sending traffic to a specific offer in monetizer or its smartlink? And how did you drill down to a specific geo-carrier?

I have no experience sending traffic to smartlink, so would be interesting how you deal with variable payout and manage the campaign.

All the best @Luke.

And do you keep ad delivery method as distributed or standard?

nitin said:
Also, are you sending traffic to a specific offer in monetizer or its smartlink? And how did you drill down to a specific geo-carrier?
Click to expand...

Specific offers on Monetizer. The offers tell you what carriers they allow (if they're specific to certain ones).


nitin said:
And do you keep ad delivery method as distributed or standard?
Click to expand...

Alright, so I didn't get a chance to look at this last night, but here's my data so far:


As you can see, one of the campaigns is profitable. The reason I've spent so much on the second campaign listed is because it's gotten a lot of conversions, but unfortunately, those conversions seem to be fallbacks on Monetizer rather than the main offer.

Monetizer allows you to drive traffic straight to particular offers, which is what I am doing, but they'll monetize every click the best they can with back button redirects and every type of monetization strategy they can think of.

It's okay though, I will adjust the CPA for each offer/campaign in my optimizer and it'll automatically adjust to optimize for those CPAs.


So, I am getting conversions and this does seem to have some potential. With the last campaign listed that is profitable, my optimizer is showing the following:

For the campaign with the most conversions, here's what the optimizer is doing:

Pretty cool! I am guessing that based on the data above, the top 2 campaigns listed will likely stop getting much traffic outside of the zones they have conversions on. Fingers crossed we're able to get more traffic on the winning campaign

Btw. I am using an average CPA in the optimizer because it’s completely independent of any tracker. It just pulls the total conversions for the campaign from PropellerAds stats.

Although this does cause some manual calculations and potential issues for dynamic payouts, it makes the setup and optimization process much more efficient.

I’ve always thought it was kind of odd that @PropellerAds didn’t build in passing the payout into their postback so you can get better reporting on their platform, but I’m sure they have their reasons.

Well, the traffic yesterday did not perform as well as I had hoped


Those are the new totals (table headers above).

I made some optimizations to 2402121 and 2402120 based on data in Kintura / PropellerAds and hopefully that'll help. We'll see how it goes today. Most traffic will stop automatically by the optimizer if it does not improve.

Luke said:
Well, the traffic yesterday did not perform as well as I had hoped


Those are the new totals (table headers above).

I made some optimizations to 2402121 and 2402120 based on data in Kintura / PropellerAds and hopefully that'll help. We'll see how it goes today. Most traffic will stop automatically by the optimizer if it does not improve.
Click to expand...

Not sure why but this is the issue I too am facing with Propeller. First day profit, second day works poorly (even on zoneids that were converting good yesterday)
You had the same issue in tiltwin campaign too.
I hope the campaigns improve tomorrow.

nitin said:
Not sure why but this is the issue I too am facing with Propeller. First day profit, second day works poorly (even on zoneids that were converting good yesterday)
You had the same issue in tiltwin campaign too.
I hope the campaigns improve tomorrow.
Click to expand...

Yeah, overall the Monetizer strategy is just tough because the payouts are so dynamic. Works well for random remnant traffic, but not really for "targeted" campaigns.

I've had a lot of success with PropellerAds in the past so I'm not going to make any assumptions about the traffic besides what I already know. Just need to keep testing

Yeah I agree that propellerads traffic is good. Its just me who is facing at the moment.

Started a new campaign using @LosPollos casual dating smartlink. Off to a pretty good start. I'll create a separate follow along if it's profitable after 10x payout spend (currently averaging about $1.55/conversion).

Damn, that's awesome. I haven't seen payouts that large on LosPollos yet lol

I am making adjustments to the optimizer. I'm thinking about letting it run for 24 hours using the Distributed ad delivery option and then optimizing based on the data collected from the Zones. It's been super interesting so far and the optimization definitely seems to have some potential as I am seeing impressions/conversions from the Zones that are performing well overall. The initial testing seems to be the trick.

Even with monitoring the Zones, some will be too expensive and drive too much traffic simply because of how often bidding on PropellerAds is updated (you can change your bid all you want, but it appears to actually only update twice an hour).

Here is a screenshot of my current campaign stats for the Los Pollos link:

Clearly, the optimizer overspent optimizing the top 2 zones. The others have some potential though. This campaign has made $21.86 so if you take out those top 2 spending Zone IDs, I've only spent $17.21. That second zone may actually end up being profitable too with time since it seems to convert well.

Anyway, definitely some potential here. Monetizer is tough because of the low payouts, but the optimizer is definitely heading down the right path

Switched the smartlink campaign mentioned above to Voluum. Will report back on how that performs once I see some more data 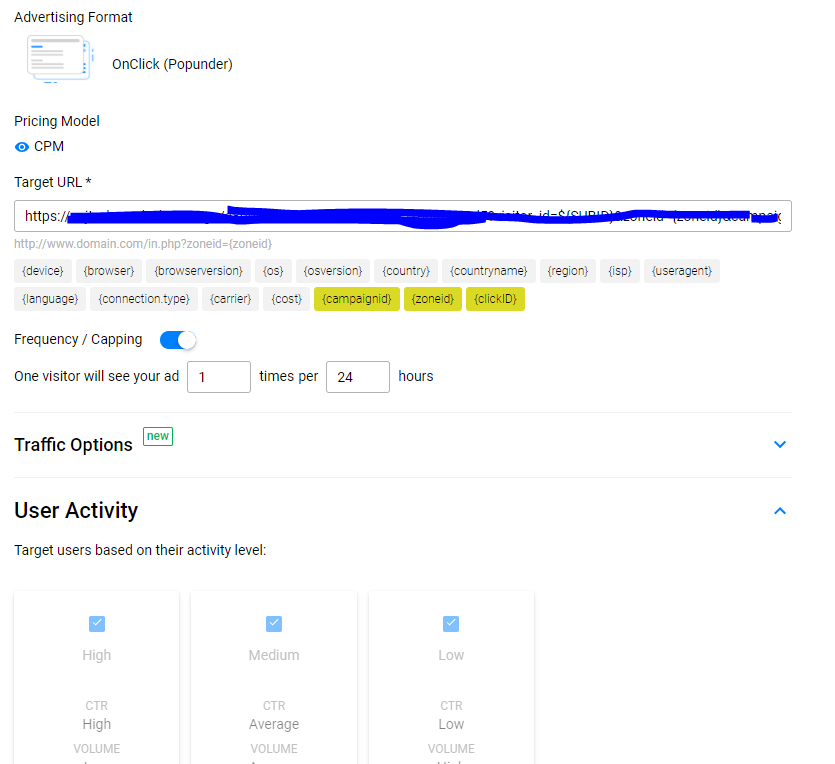 Does it have a proprietary version?
You must log in or register to reply here.

New features that save hours of campaign setup and optimization!

Monday at 10:31 AM
PropellerAds