So, quick story. I recently reconnected with Nana from Prosper202. Nana and I have been in touch on and off over the past 10 or so years. I blogged quite a bit about the Prosper202 tracker and created documentation for my PeerFly publishers over the years.

Anyway, a few years ago, Prosper202 switch to being exclusively a paid tracker. It was free for a long time which is why I recommended it to my new publishers and why it go so big.

Well, Nana messaged me yesterday with some interesting news... 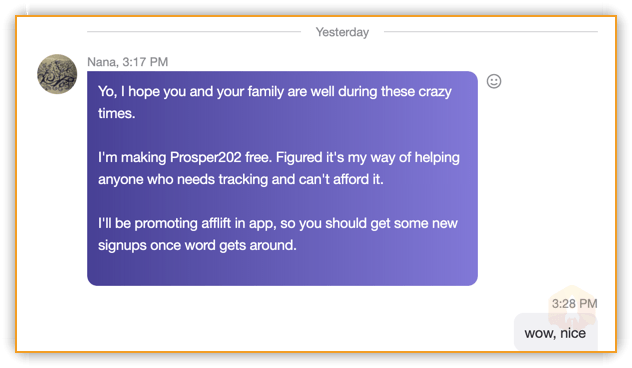 First off, it's pretty cool of Nana to make Prosper202 free. I am not sure what his long term plan is because obviously he can't feed his family selling a free tracker, but this seems like a great opportunity to give Prosper202 a try if you haven't used it a few years like me 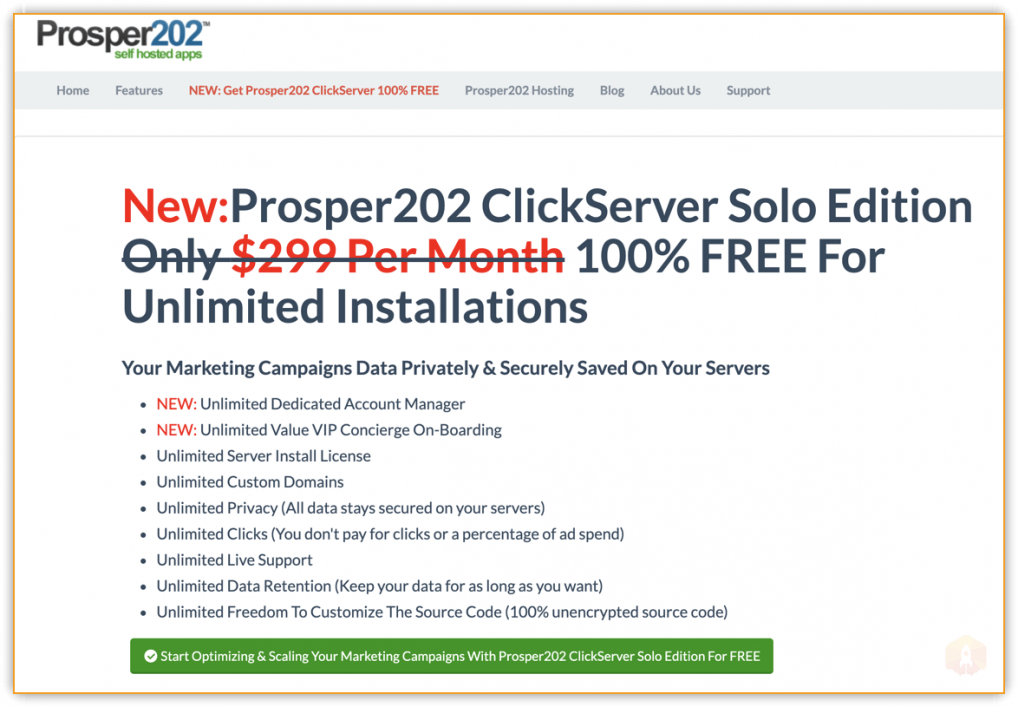 Click the green button to sign up. You'll be taken to your account page once you're all signed up. It's still asking for billing info, but you can download P202 simply by going to the Get Prosper202 link:

I just downloaded it so I haven't had a chance to set it up a server yet, but I will do that this afternoon and I expect some serious nostalgia since I spent years looking at Prosper202

Nice, I haven't used this in years!

agentf said:
And @Luke If you want some free hosting for a few weeks to try it out let me know
Click to expand...

Haha, appreciate it, but I think I'll just toss up a droplet from DigitalOcean to test it out on

I bet it is still old code... if they pushed hard from the start on their tracker they would have conquered the space. RIP to 202 team

Ianternet said:
I bet it is still old code...
Click to expand...

I don't believe so. Nana has been actively working on P202 for years, but I believe just with a few bigger clients.

Not sure why he would then release it for free, but we'll see. I'm going to do an install this afternoon and check it out. No matter what, having a free self-hosted option is pretty cool for the industry imo.

Thats nice. Prosper202 gives me nostalgic moments as it was my first tracker way back in 2008. I had a chance to meet Wes Mahler of Prosper202 at the Affiliate Summit in Boston in 2008!

Will definitely try to see how it works now and sure it would rekindle my successful days.

I got bored and set up a quick copy to take a look, my first impressions are that the interface is slow, looks dated and is somewhat confusing now I'm used to the newer cloud-based trackers!

There are a number of ads and links other things which are to be expected on a free version of anything but otherwise seems all there.

If anyone wants a look but doesn't have the time/skills/patience to set up your own here are the login details to my test site.

Please don't trash it as someone else might want to have a poke about, the account is a Campaign Manager not Admin if you want to access as admin PM and I'll set you up.

Remember this is just a test system you can see what it's like etc. DO NOT try and run a campaign from it!!

@agentf tnx for the test site. saved a lot of time indeed.

Ianternet said:
I bet it is still old code... if they pushed hard from the start on their tracker they would have conquered the space. RIP to 202 team
Click to expand...

You would lose the bet
C

Sir, Please include WordPress Plugin also. If You can.

Thanks Luke for sharing the news.

The free Prosper202 is the exact same code as the paid Prosper202. I'll explain more about the reasoning later down.

Prosper202 has been under almost solo development since 2011, I returned to work on it after Wes and Steven purchased it back.

Wes eventually moved on to other projects and I took over it full time.

There’re a lot of new things to discover and benefit from in Prosper202. Some of them were/are industry firsts. I fully expect other trackers will adopt some of the stuff I built, it's competition.

Here are examples of tech Prosper202 was first to have purlink zero redirects. That’s the ability to eliminate redirects from your lp to your offer. It uses your affiliate link directly but Is faster due to automatic optimizations Prosper202 does on the landing page

Currently Prosper202 is also the first and only tracker to offer deferred pixels.This allows you to fire client side pixels with a postback. Imagine being able to build FB purchase LLAs even if your offer only allows postbacks.

There’s a lot more, so skim the changelogs to see everything.

Currently I have Warp202 under development. It’s an entirely new plug in redirect engine built for speed. I ditched php which is old and sluggish and wrote everything with Go. It’s enterprise level performance, we are talking about the ability to handle thousands of redirects in milliseconds.

So why free? Why now?

People have never stopped asking for the free Prosper202 to come back since it became paid. So I have always known there was a need for it.
But the old way Prosper202 was eventually monetized (we launched Revolution202) is not a model I wanted to redo so it become paid.

Luke didn't mention this, but he asked for deal (cheaper Prosper202) for all of you. I politely declined.

The logistics of two code bases for free and paid was too much to deal with as a solo dev. The only way this could work is if it was the same code for both free and paid.

I wasn't willing to do that, and also it's kind of scary putting a free version out there that's the exact one people pay for, which in turn pays my bills and keeps my family fed.

But I woke up yesterday thinking about the tens of thousands of people who have been put in worse situations due to the current pandemic. I felt I was in a position to make a small difference in the lives of a small fraction of those who will be affected.

The original free Prosper202 made it possible for thousands of affiliates (people) to make a living during the last big recession in 2007-2009. Some made millions due to having access to Prosper202, and a few went on to do really awesome things for this industry.

You can thank Wes for that, back then I thought it was a terrible idea to offer Prosper202 for free. Now here I am doing the same lol.

If I'm able to replicate just a fraction of that again, it would be worth it.

So I came up with the following idea. Free Prosper202 and Paid Prosper202 will be exactly the same. But the free version doesn't come with live support from me. There's the knowledge base at https://support.tracking202.com for that, and all of you have this forum.

IMHO: Luke's Prosper202 content was/is one of the best. He often went into more detail on stuff than we did on our end. So you are in good hands.

Eventually there will be a way for you to to purchase upgrades that are mainly tied to support and access to my time. The current breakdown is

Plan 2 ( Estimated price $299+ a month)
Everything above and live personal one on one zoom calls for CTO/CMO as a service type assistance.

My hope to is that, you will upgrade to paid plans when they are financially able to do so. At the end of the day, your money pays my bills. It also allows me to support you better and speed up the the development process by bring on more developers.

My feature backlog is massive, I'm heading back to my code editor once this long post is done to finish a major new feature for purlinks.

I will be active here as much as possible, to answer your questions and generally be a part of this community Luke built.

My only ask is to not "expect" me to personally answer your support questions. I will always chime in if I'm free and able to do so, but out of fairness and general sound business practices, my priority will always be to my paid customers.

Good news from one of the stand-outs in tracking knowledge.
Much appreciated

can the software track bots automatically from the start or should I identify bot traffic myself first and add it to blacklist manually?

mukil said:
Thats nice. Prosper202 gives me nostalgic moments as it was my first tracker way back in 2008. I had a chance to meet Wes Mahler of Prosper202 at the Affiliate Summit in Boston in 2008!

Will definitely try to see how it works now and sure it would rekindle my successful days.
Click to expand...

Wow that was a long time ago. I remember that summit well because it was the only ASE attended, the rest were the Vegas events

can the software track bots automatically from the start or should I identify bot traffic myself first and add it to blacklist manually?
Click to expand...

There's a built in bot detector, we are also integrated with IPQualityScore for enhanced bot and fraud detection.

T202Nana said:
There's a built in bot detector, we are also integrated with IPQualityScore for enhanced bot and fraud detection.
Click to expand...

That is quite interesting, is that available for the free version? Is there any info on that in your documentation?

agentf said:
That is quite interesting, is that available for the free version? Is there any info on that in your documentation?
Click to expand...

Absolutely everything in the paid version is available for free users. The only difference is that there's no live support. I'll be adding a lot of content to the knowledge base to ensure free users get as much help as possible.

Not sure if that's in the documentation yet, but there's info here https://prosper.tracking202.com/blo...inel-tqe-click-fraud-prevention-for-marketers

T202Nana said:
Luke didn't mention this, but he asked for deal (cheaper Prosper202) for all of you. I politely declined.
Click to expand...

I need to start asking people for more discounts...

Hello It's Nana from Prosper202/Tracking202