To be a multi-vertical network is amusing. We have imposing experience in many verticals and right now we want to share with you the Crypto case study of our good partners.

Enjoy and feel free to leave comments below!

We left all expressions in the original.

“At the end of April, we set out to test a stack of non-trivial geos for crypto offers. Since the geo is not the largest, it means that Facebook moderation will not be too aggressive, at least we wanted it (if Facebook moderation, in principle, can be at least remotely called non-aggressive lately).

We reviewed the resources we had and began to think about how to test it.

We were faced with a difficult task — to push and convert the old aggressive approaches with pre-landers with celebrities , remaking them in a new way.

CMaffiliates managers generously suggested we test geo/offers on CPL basis (by the way, they have plenty of them, almost in each and every geo) in order to reduce our costs and risks of tests. Having sufficient experience in the Crypto vertical, we decided to take the bull by the horns right away, chose a couple of geos with native call centers and started testing.

We dug up old pre-landers, and also asked CMaffiliates’ managers to provide us with some LPs, which they kindly did.

Then they were slightly modified, retouched and put into the test (special thanks to the manager Anastasia for the working pre-landers).

Will reveal the cards right of the door and give an example of the most successful LP we have used for Greece:

On this LP, we used an aggressive approach — well-known successful local entrepreneurs/businessmen. True, for a high trust from the audience, you have to pay with bans from Facebook. 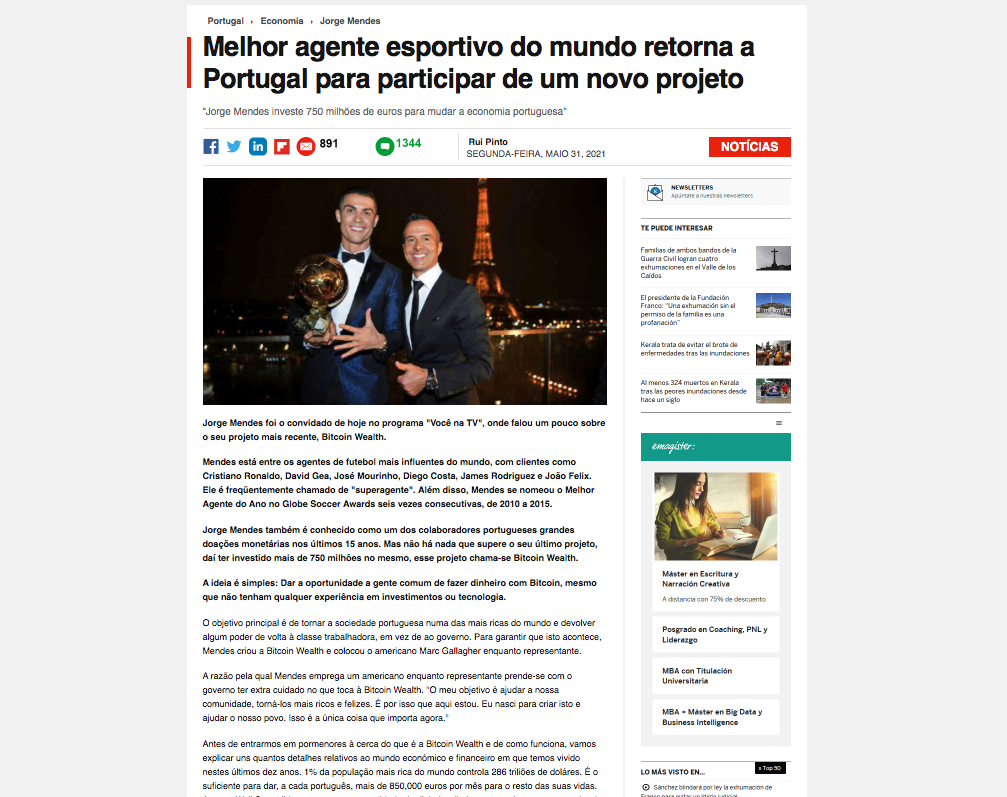 Regarding the promo:
The results: 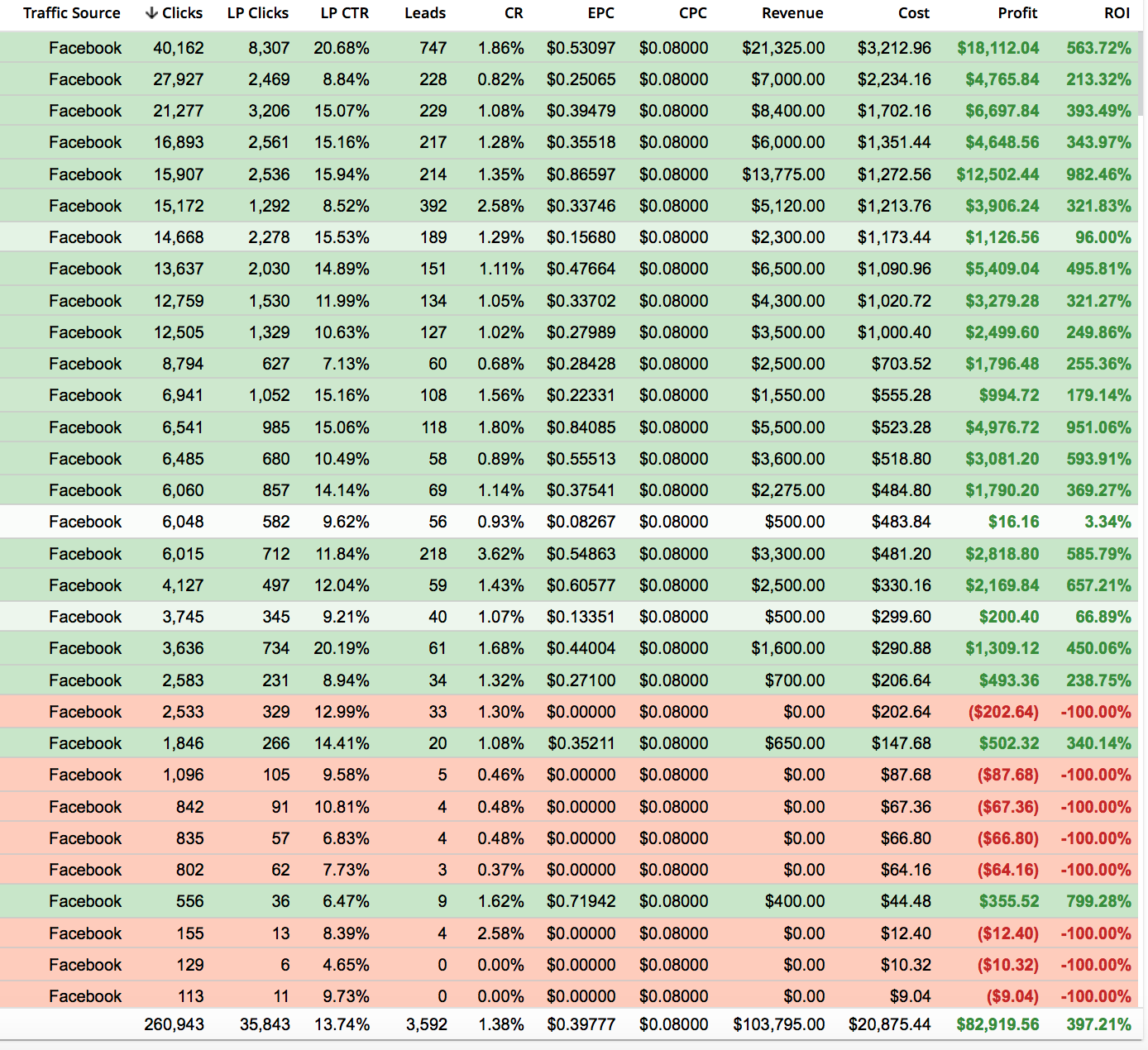 A feature of these campaigns is PROMO/CREATIVES. In symbiosis with converting offers and native call centers, they squeezed out the maximum profit from incoming leads.

Our recommendation is to spare no effort and resources for cool promotions (all our winning videos were made not in-house, but with the involvement of contractors).

It was the original promos that helped buy leads at ridiculously low prices, minimize bans, although this still remains the biggest headache.

Placements that were used:
Targeting is as wide as possible (M/F age 35+, this increases the envelope and gives excellent LTV on the advertiser's side. So this kind of traffic will be 1000% taken care of well by the advertiser

Another invariable fact — if you pour in a constant good volume of leads, then the conversion is +/- at a stable level (in our case it was below 3-4% in Greece and 6-7% in Portugal, respectively) which was a great indicator considering Geo and a wide target.

Conclusions and tips for working with crypto offers​

We have not seen such ROI for several years and will definitely continue testing.

The test brought us cool results, so we took it out for ourselves that the key to successful campaigns in Crypto today consists of several components:

As practice shows, all old LP work well, even aggressive ones. They just need a fresh twist in the form of original promo / creatives that Facebook and users haven't caught on.

Offers and high-quality calling of leads​

You can send a ton of traffic, but if the advertiser can’t do his job well, then all your costs and efforts are down the drain. The expertise of the affiliate network is important here. We trusted CMaffiliates and didn’t regret. The guys perfectly converted our traffic, every morning they dropped lead statuses and pushed advertiser so that he more actively squeezed late deposits from our traffic. The ROI hints that they did a pretty good job.

Don't give up after the first setbacks. From our experience, if the campaign immediately started working in “0” or “plus”, it is a great luck. Continue tests. To find a winning combination, we needed to test dozens of them.

For those guys who do not have resources — take the Crypto by CPL — this is an easy way to test your hypotheses. CMaffiliates have about a dozen CPL GEOs: expensive and not so expensive.

Even if you don’t know the language or it is difficult to translate on your own, there are always burse and tools. You can start with Google translate. Generally such GEOs bring the greatest profit.

Do not forget to do preliminary reconnaissance on GEO, because each has its own characteristics. Don't be afraid to ask your manager for advice. In our case, CMaffiliates showed us the regions of locations with an excellent and completely dead envelope. This greatly influenced the result.

That's all, thanks for your attention!

If you want to have the skyrocket ROIs, just register here.

This is an awesome case study. Thanks for sharing it with us!
Nice case study but i do not think they accept beginners
A newbee question: is there a danger that celebrity would file a lawsuit if you use his/her pics and video?
Nice case-study. Facebook has been very loose with bans lately. For me it raises 2 obvious questions:

1. how/where do you run the accounts with these type of campaigns?
2. how/which cloaker do you use for this?

Luke said:
This is an awesome case study. Thanks for sharing it with us!
Click to expand...

redone111 said:
Nice case study but i do not think they accept beginners
Click to expand...

The actually do, basically that’s why we share case studiews, so Newbies can learn off of them

We also provide a small guidance, but you have to show great effort and dedication from your side as well.
For register just click the link - https://bit.ly/2Ua3eY4

crazybean said:
A newbee question: is there a danger that celebrity would file a lawsuit if you use his/her pics and video?
Click to expand...

Yes there certainly is. You have to always understand that this method of promotion is very aggressive, and therefore teams (or affiliates ) can face consequences, that’s why precautions should be taken in advance.
If you want to know the details and tools, feel free to write to our managers:
@Anastasia_CMaffs
@Tammy_CMaffs

kingpush said:
Nice case-study. Facebook has been very loose with bans lately. For me it raises 2 obvious questions:

1. how/where do you run the accounts with these type of campaigns?
2. how/which cloaker do you use for this?
Click to expand...

And for the first question - could you please specify it.
For the second - all the common software that is there on the market is good for this type of promotions. The secret sauce of every cloaker today is really simple - it has to have a vast database of IPs of certain bots, or moderators. That’s it

So pick the one that is most common and start testing it.
Why did you end the campaign?

makifkaban said:
Why did you end the campaign?
Click to expand...

The campaign has not been ended, but just transformed.
As Said and was expected they reject beginners' applications.Thanks anyway!!

redone111 said:
As Said and was expected they reject beginners' applications.Thanks anyway!!
Click to expand...

Our manager tried to contact with you via skype Anastasia CMaffs, but you're not answering. Please, check again.
thanks a lot for sharing this @CMaffiliates.

Tyoussef said:
thanks a lot for sharing this @CMaffiliates.
Click to expand...

Thank you! Today we'll have one more, don't miss