Guide How to Calculate Clickloss/Click Loss Percentage on Zone/Source Level?

If you run PPV traffic, then you might have already faced clickloss issues in the past. Clickloss is basically a discrepancy between the amount of traffic you paid for and what you received. Lord @Nick explains it in-depth in his guide here: The Ultimate Guide to Clickloss.

So, I was recently trying out a new traffic source and Clickloss% was so bad (around 40%). So for every $100 worth of traffic I purchased, I was getting only $60 worth of traffic. That's bad. So I had to block zones with a very percentage of clickloss for me to be able to continue the campaigns on this traffic source. So here's how I exactly did it using Excel (you can use Google Sheets too):

Download the zones/sources data of your campaign from your tracker as well as your traffic source.

Organize the data from your tracker and your traffic source like this: 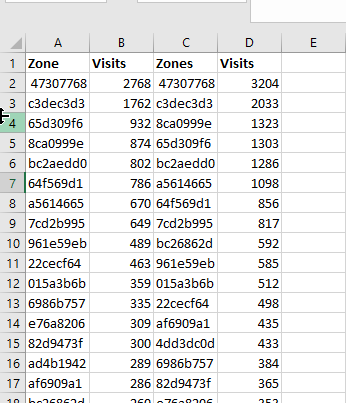 Because the list of zones from my traffic source's report is not in the same order of my tracker's list, we will have to match
To view the premium content in our affiliate marketing forum (including this awesome thread), you must first register and upgrade your account. Register today and become a part of our amazing community!
You must log in or register to reply here.

Where in bemob I find my zones and sources?