I have a long history with Affiliate Summit. I was just searching through my Facebook Page and found some really fun photos from my experiences at Affiliate Summit over the the years (I'll post them below). I've been an exhibitor, speaker, won awards, met amazing people (including many affLIFT members), and had so many amazing experiences it's impossible to even write them all down.

So, it goes without saying that I am EXTREMELY excited to announce our partnership with Affiliate Summit!

The folks at Affiliate Summit reached out to me earlier this year and told me that there were so many people talking about affLIFT at the last Affiliate Summit in Las Vegas (I did not attend because of COVID) that they wanted to partner with us.

I was already planning to attend the next Affiliate Summit this May in New York (Marriott Marquis Times Square) so I happily accepted their proposal.

Affiliate Summit East will be in New York on May 24-25th.

What does the partnership mean? Well, for one, we will be exhibiting affLIFT at Affiliate Summit. I represented affLIFT at the last Affiliate Summit I attended, but I've never exhibited us there so that will be cool. It will be a great opportunity to bring new companies and affiliates into our community.

But, what I'm even more excited about with this partnership is that they have agreed to give me 50 passes to give away to members. I will be doing that giveaway at the end of next month so if you want to attend the conference, start making your plans now and you almost certainly won't have to pay for a pass

Affiliate Summit provides you with a unique opportunity to meet some of the most interesting people you may ever meet and learn things that could literally change your life. I will share some of my experiences below. I hope you meet you there!

I published "wrap-up" posts for my Affiliate Summit experiences for nearly every year on my blog when I was actively writing. 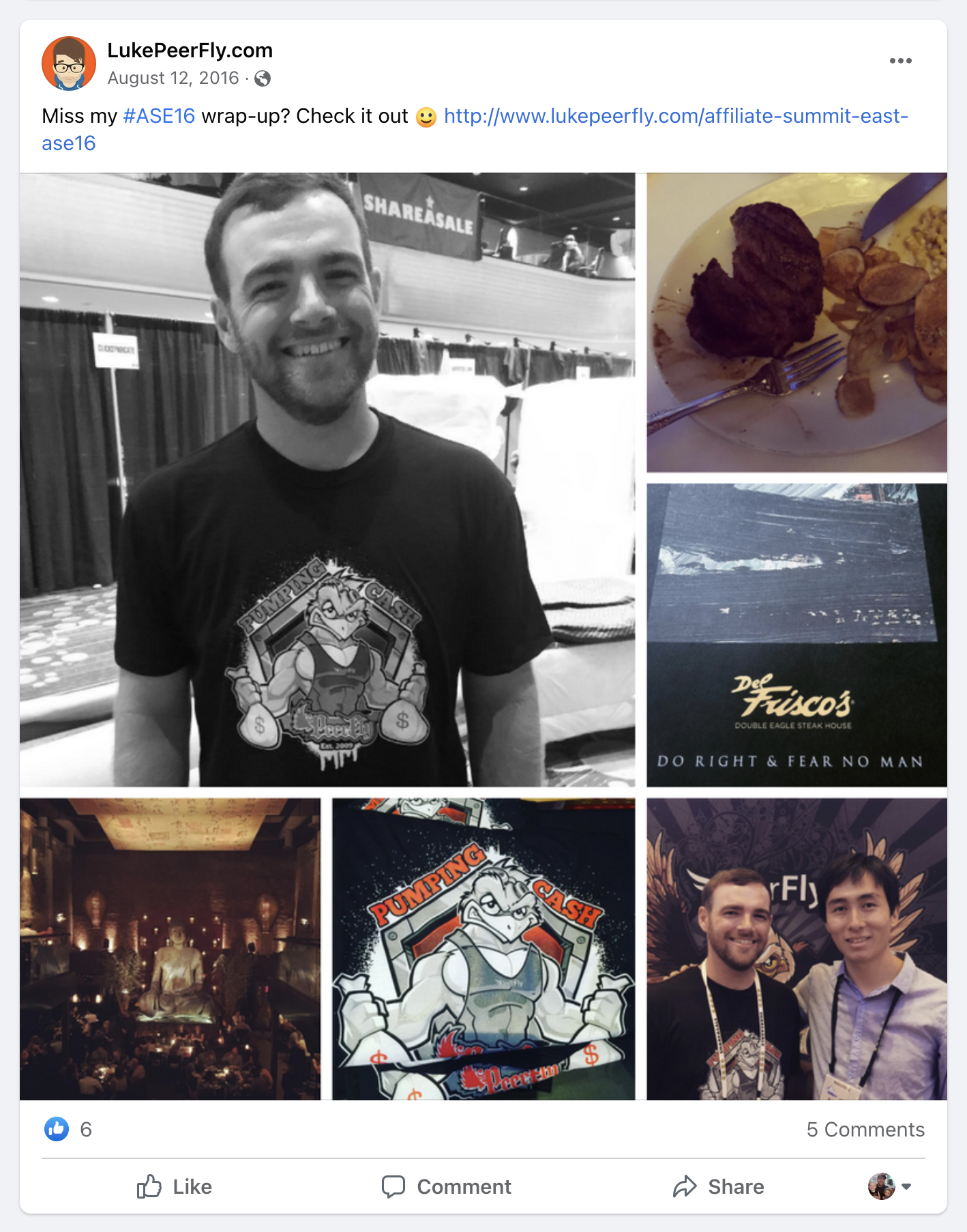 (me and @servandosilva at the bottom right) 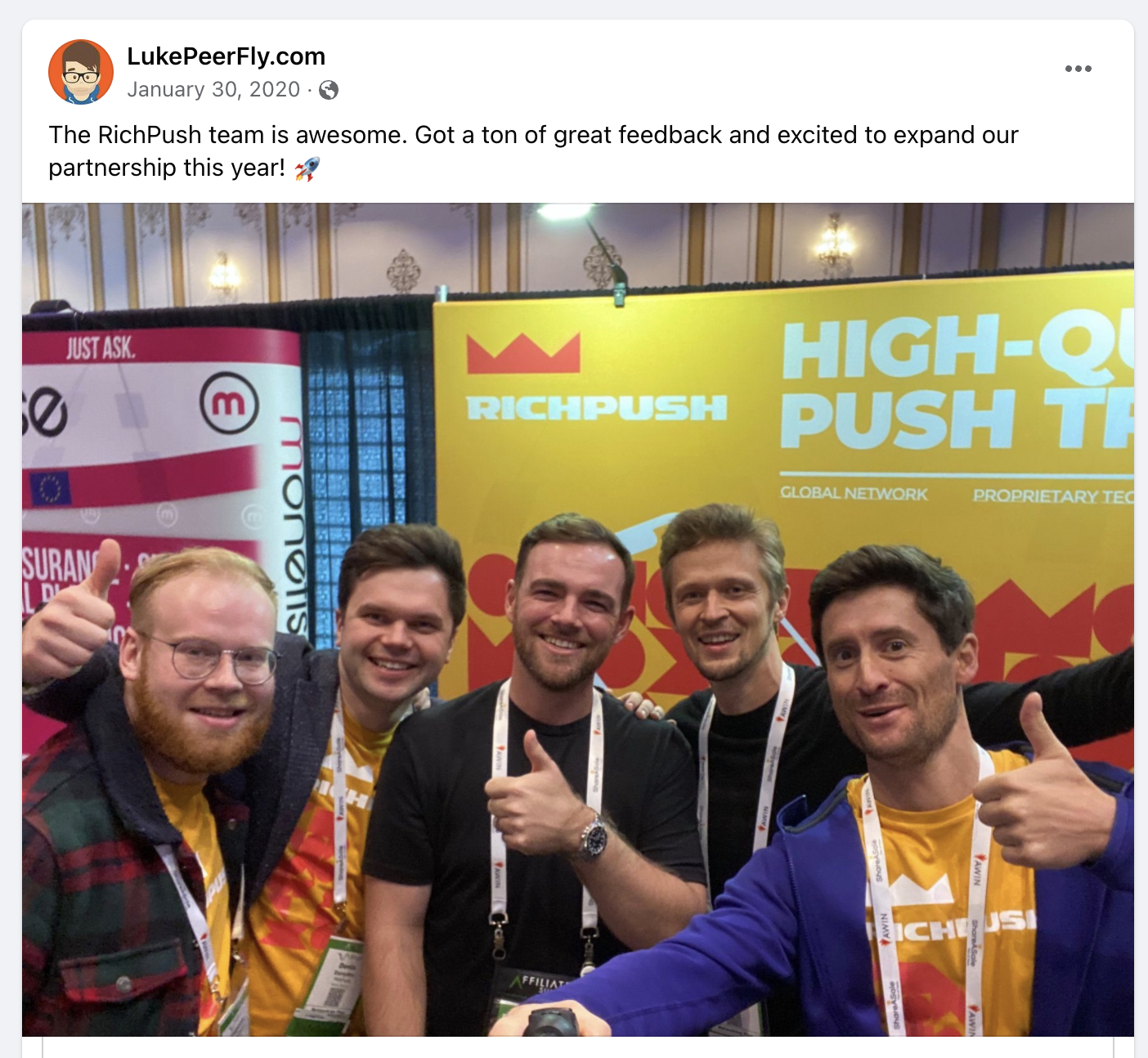 In 2012, I was voted the #1 Affiliate Manager in the World. I received more votes as an individual than any other person or company in the survey (including PeerFly. I also won $1,000 for it which was cool 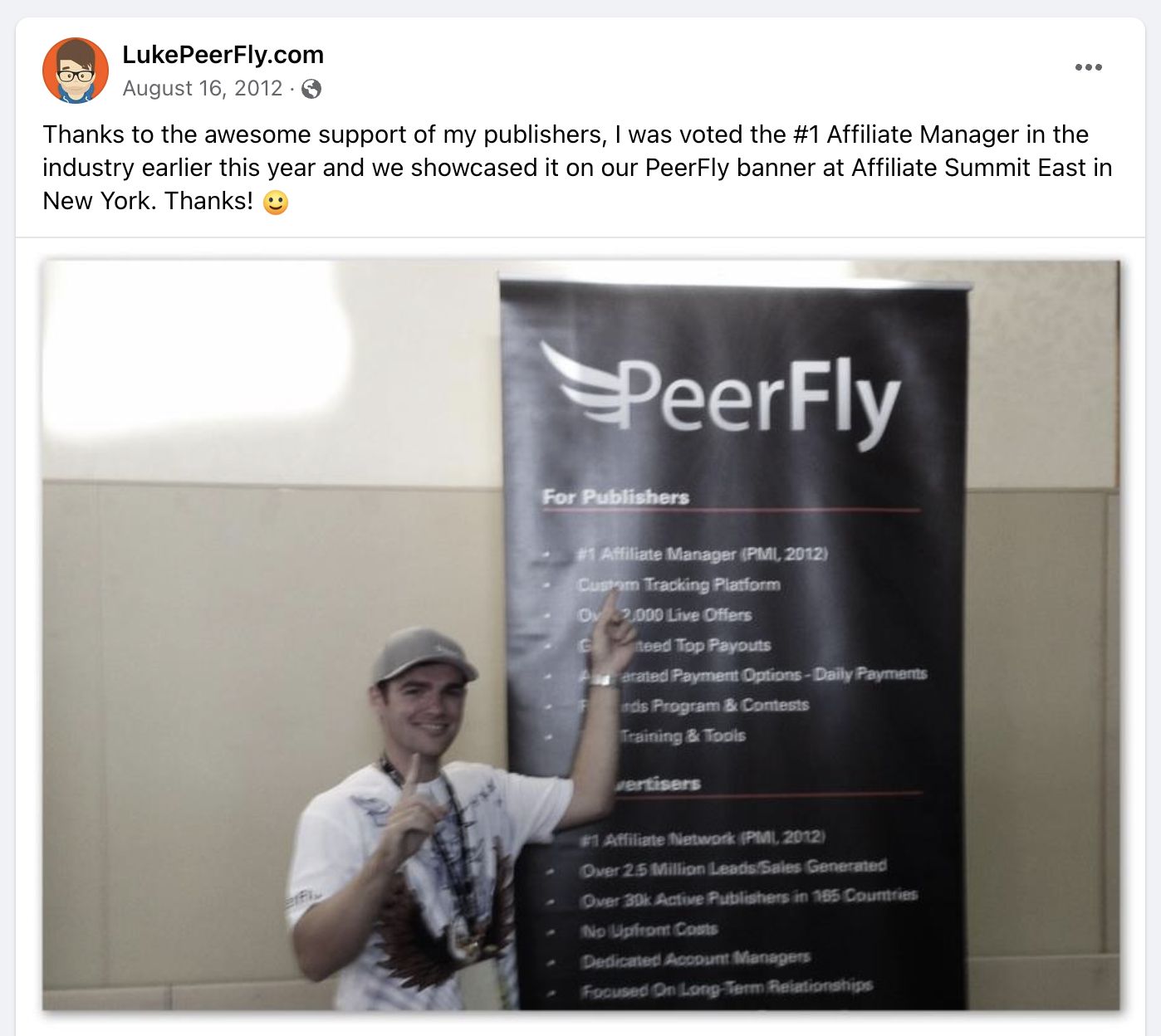 Oscar and I knew each other online but had never met in person until Affiliate Summit. He was an affiliate at PeerFly, but he also ended up writing reviews for my products like FPTraffic. 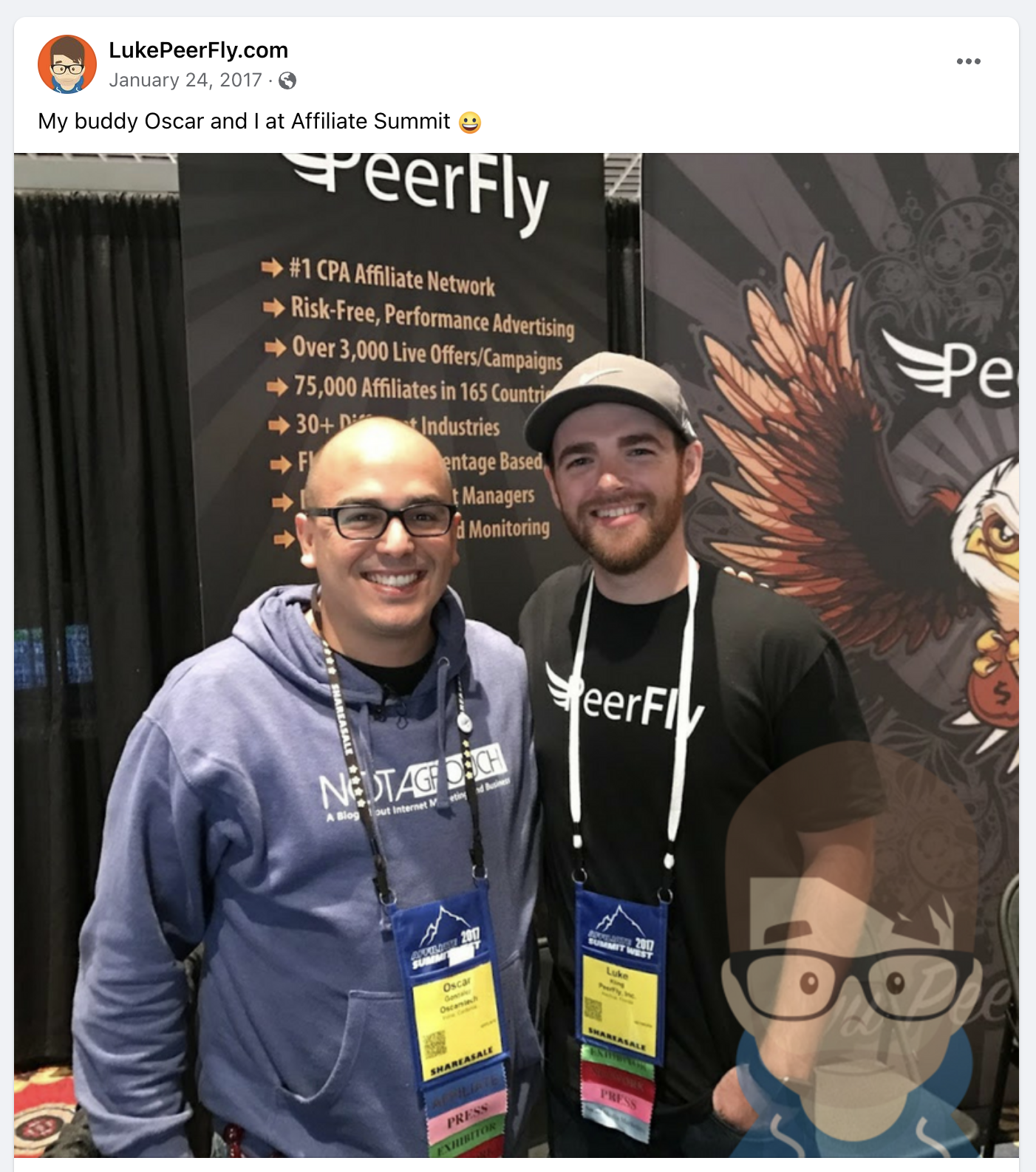 2020 was my first time attending Affiliate Summit since PeerFly shut down and I got to meet a ton of companies that are on affLIFT including many that I hadn't previously worked with. 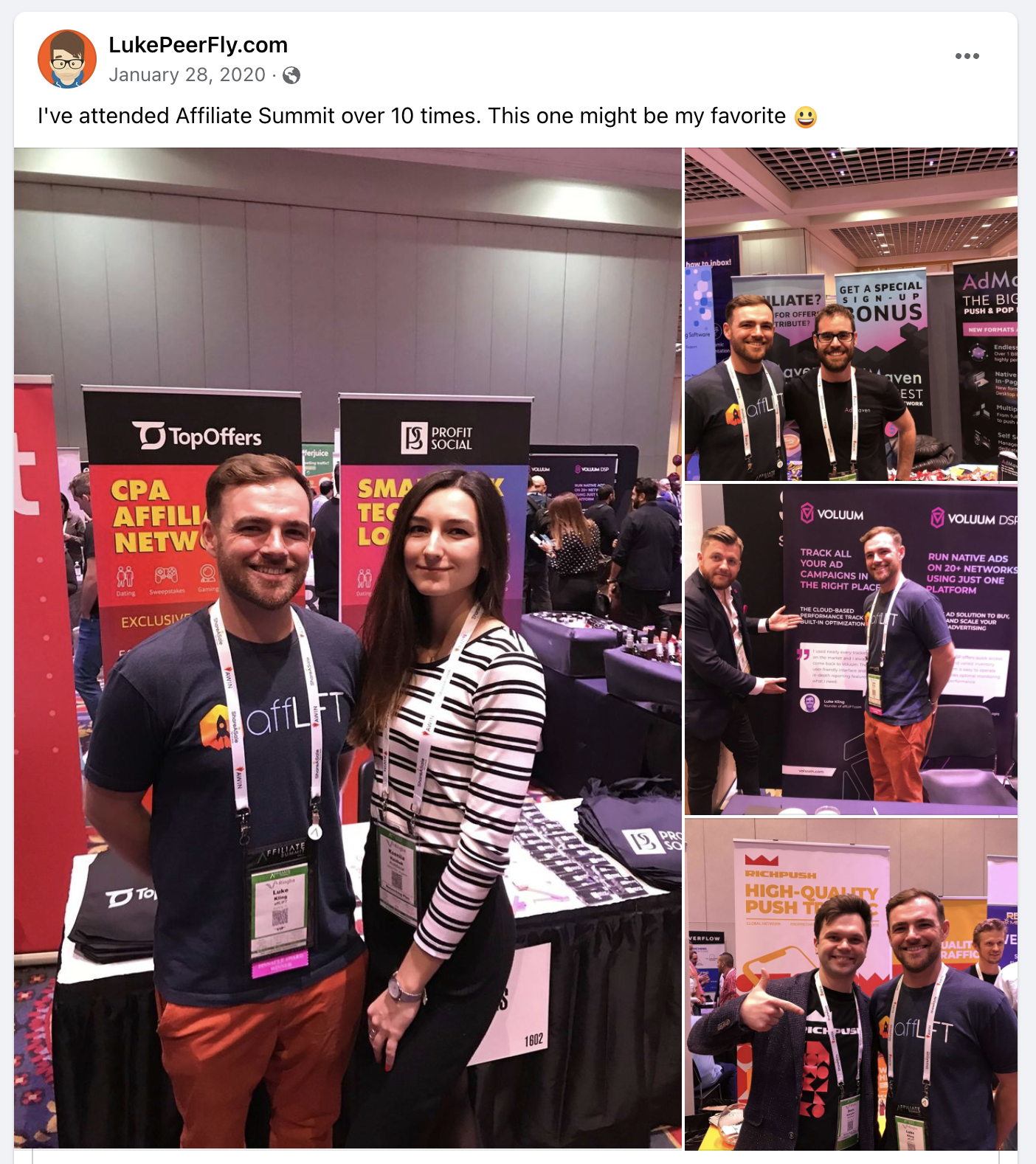 2017 was a great year for me. I won the Affiliate Summit Pinnacle Award for Affiliate Manager of the Year. I had been nominated a few times before but had never won. 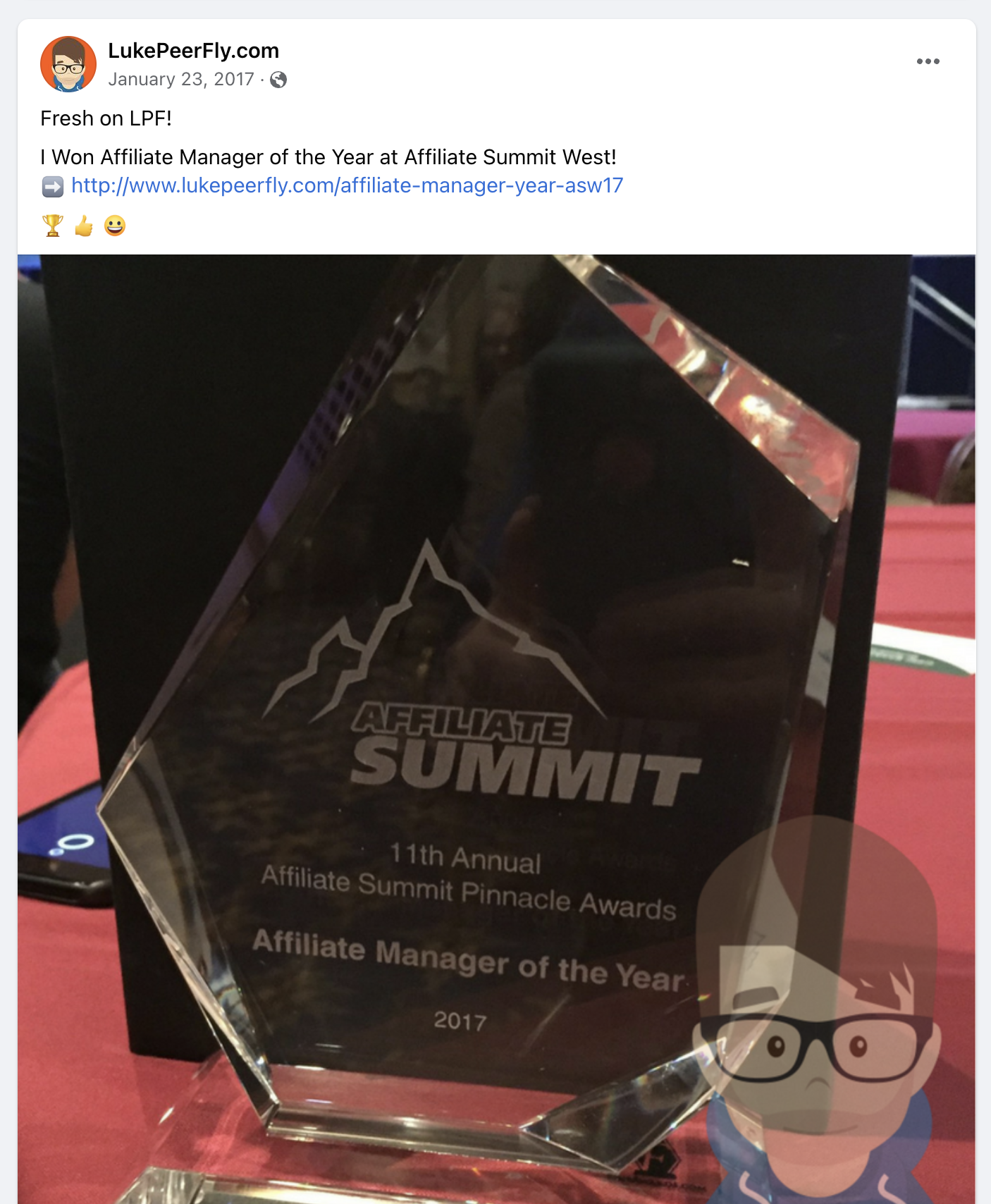 I received a TON of praise from the industry for it: 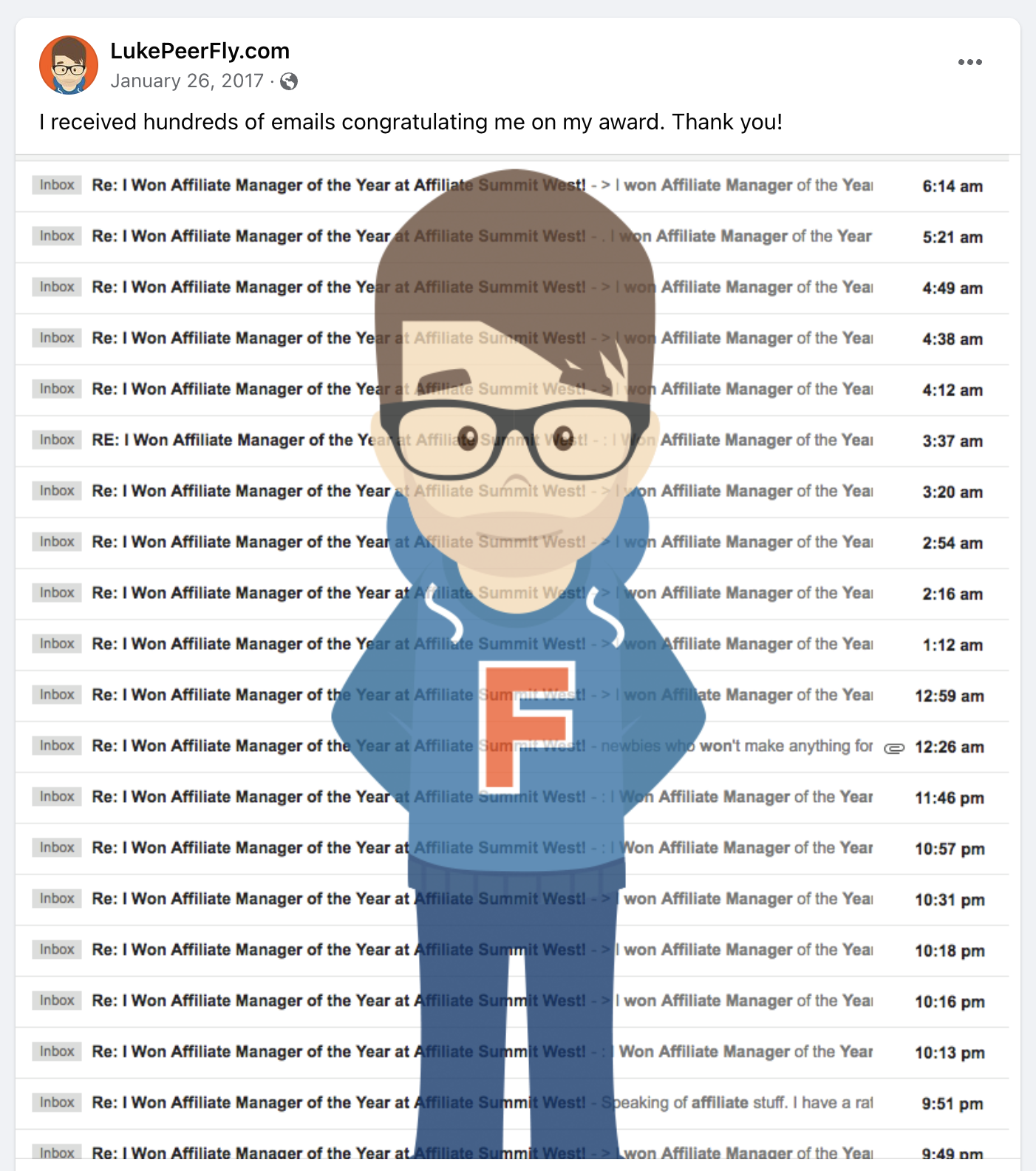 In 2014, I decided to try doing my own session at Affiliate Summit. I had never done a big presentation before but I like to challenge myself so I decided to be a speaker. My session was titled Generating Massive Traffic and Profit using Facebook Pages. This was at the peak of Pages and about a year after I launched FPTraffic. The session was voted the best at the conference that year 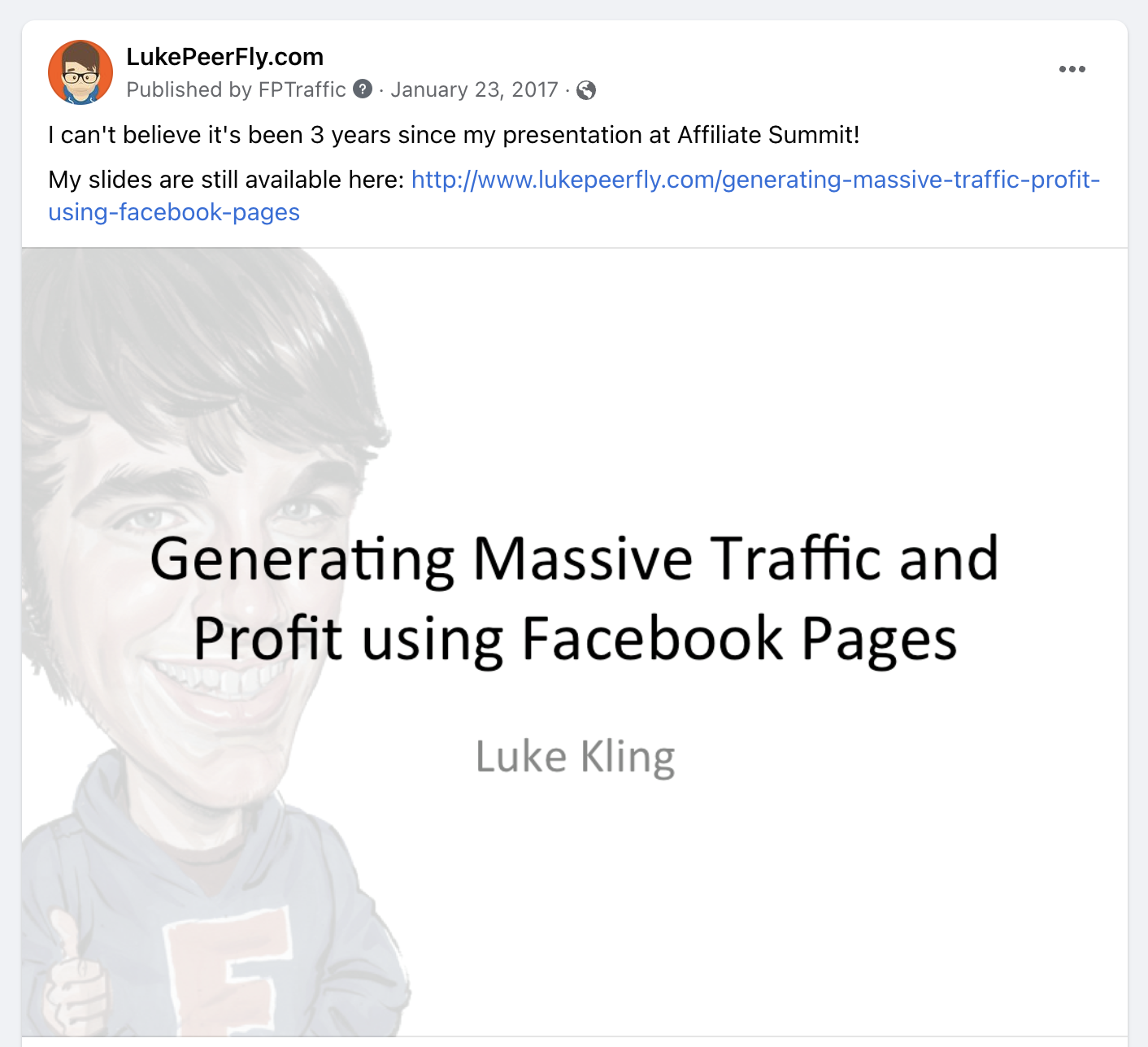 Oh, and I most died at Affiliate Summit in 2013. The conference was held in Philadelphia and I was eating with the PeerFly team at a pizza place across the street from conference center. We were inside eating when a car smashed into the side of the building (that was mostly glass). Luckily, a pillar stopped the car or it would have run us over. I found glass in my shoe later that day. 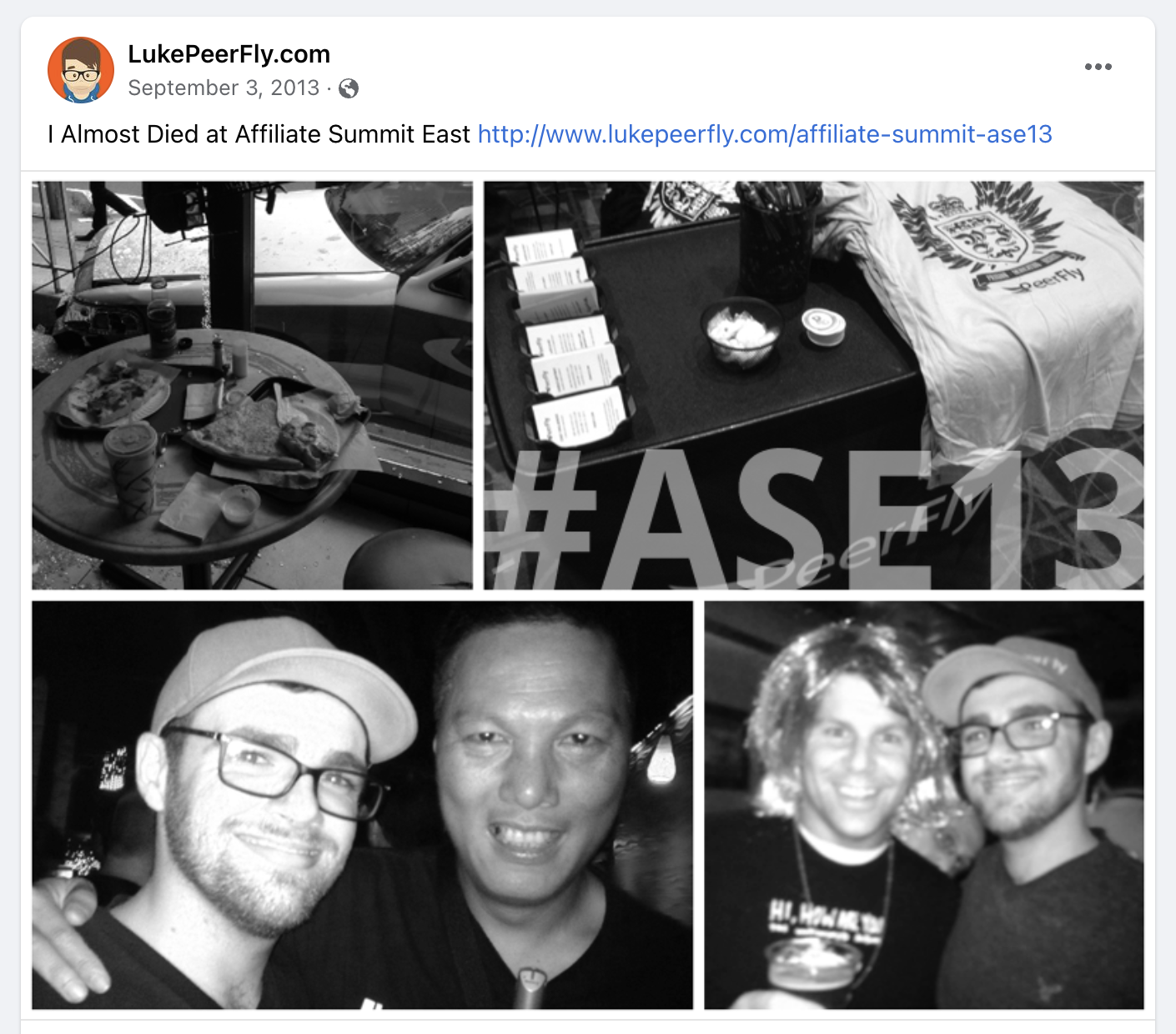 I'll also be sharing some of my experiences of how I've actually ended up making a good amount of money from the things I learned at Affiliate Summit.

Many of you may remember me talking about 7Search a lot on my PeerFly blog. There were a TON of people on forums back in the day talking bad about 7Search and how the traffic was trash. Well, guess who made over $40,000 profit with 7Search? Me! And, guess were I met 7Search? Affiliate Summit

Also, RTXPlatform (used to be called 50onRed) and I have had an amazing relationship for a decade now. A lot of that relationship can be directly tied to our meetings at Affiliate Summit. In fact, when I generated my biggest lead ever for a health insurance policy that sold for $500,000 from 50onRed traffic, I called my account manager to let him know

Awesome. I see some OGs from those FB memories.
I need to renew my passport (expired during COVID) and see if I can attend ASE!

Got my flights today to New York for ASE

I have free passes to the conference so if you want to go, let me know

I have frequently thought about attending affiliate-related conferences like this, but international flight tickets from my city are skyrocketing these days due to lack of seat supply and rising demand in the endemic. also hope I can be part of such events when I become more professional in our field

Luke said:
Got my flights today to New York for ASE
Click to expand...

Hope to book mine soon, probably go for a little longer than just the conference seeing as how I'd have to travel so far

Luke said:
But, what I'm even more excited about with this partnership is that they have agreed to give me 50 passes to give away to members. I will be doing that giveaway at the end of next month so if you want to attend the conference, start making your plans now and you almost certainly won't have to pay for a pass

Get your free pass to ASE!

Do you want a free ticket to Affiliate Summit East next month in New York?

The affLIFT booth is #2003. See you there!
You must log in or register to reply here.

Can you help Affiliate Summit? - Free VIP ticket for your time

7 tips to get the most out of affiliate conferences

Come Meet Us In New York 🗽