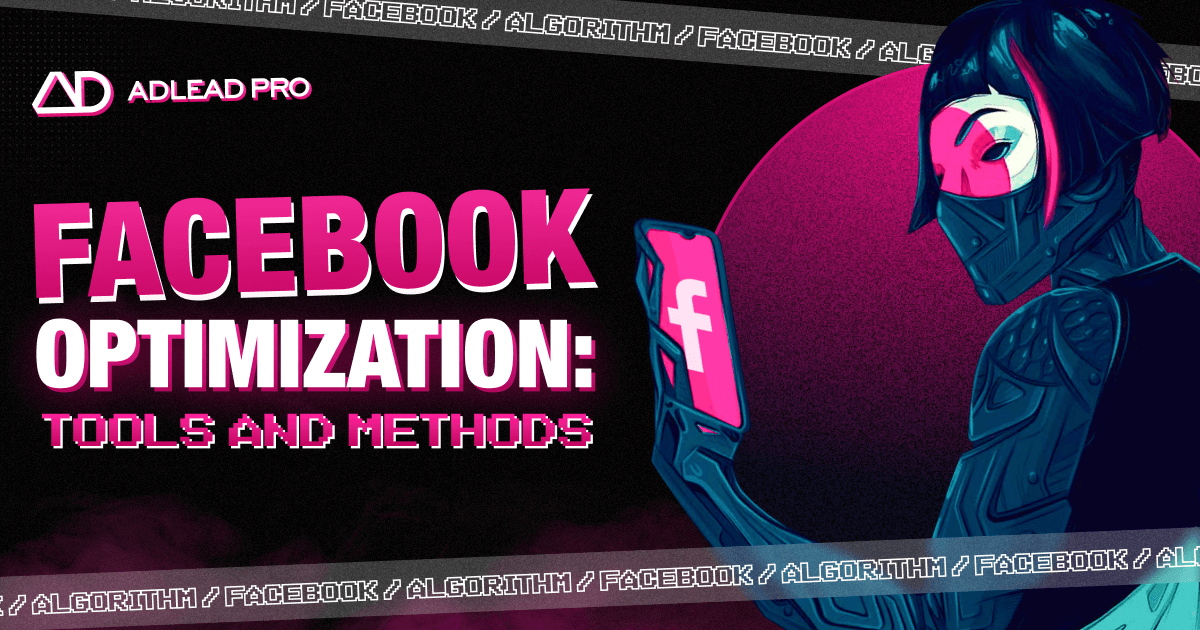 ADLEADPRO here. Now that we’ve talked about setups, how to create BMs, Fan Pages, create accounts in anti-detect, pass ad restrictions, we’re getting to the most important thing. That is: how to not blow your money and how to optimize campaigns to get profit. And moreover, how to understand if the campaign will never give you profit.

This is our topic for today.

P.S. We have some job openings in ADLEADPRO - from media buyers to managers. Check them out here.


Automated rules as a necessity​

Automated rules are not exactly the optimization, but they serve as a kind of filter that will sort through ‘bad’ elements. It is also a great way to let you live and not check statistics every five minutes. These automated rules will also save you money:

Turning off an expensive ad. If the ad brings very expensive leads, it’s better to stop traffic and start optimizing. We don’t need to check everything manually, we just need to set this rule:
In this case, if the price of a lead is greater than the one you’ve set, Facebook will automatically turn off this ad (the same rule can be applied to campaign level where you just set an amount for several conversions). 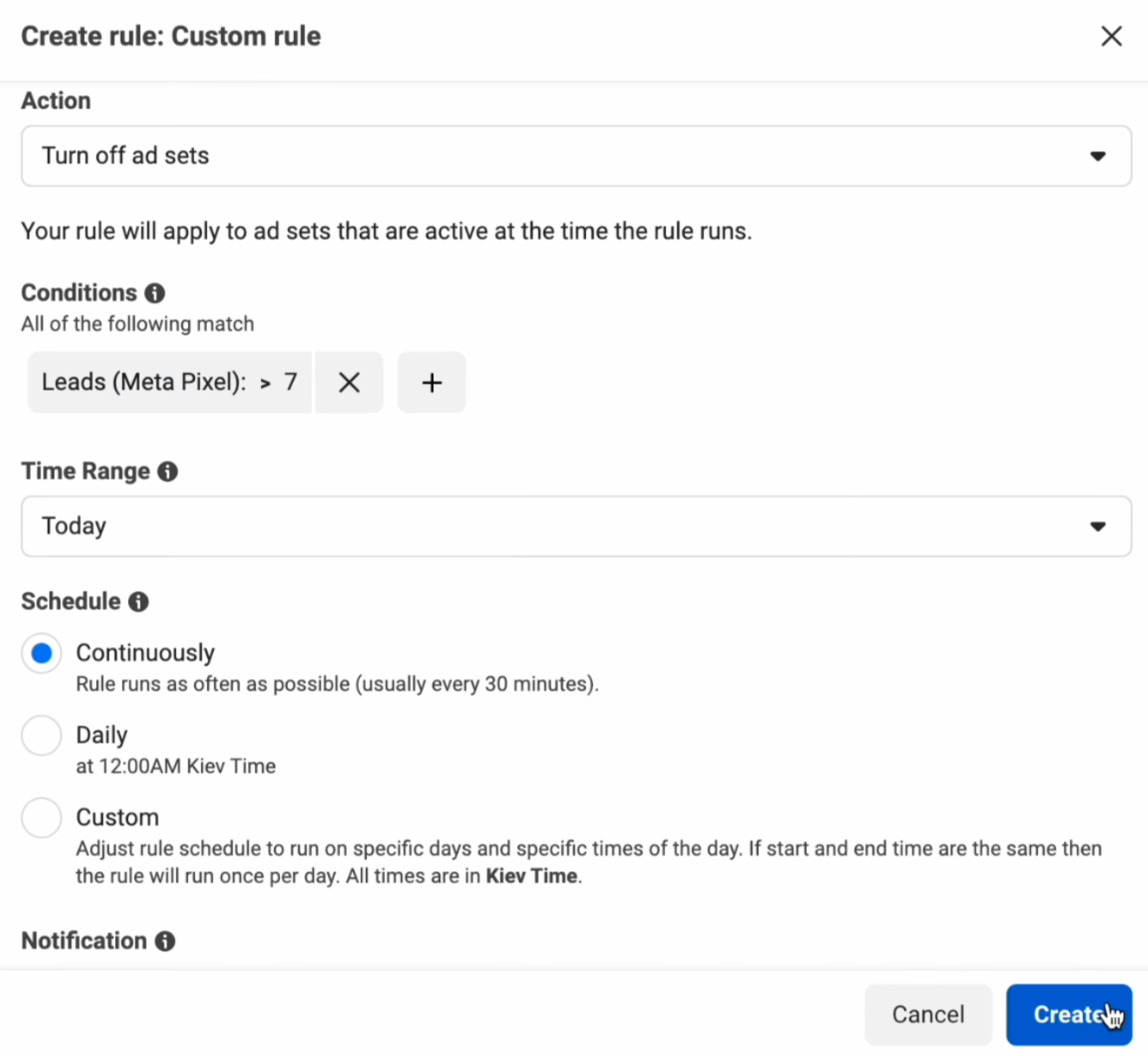 Turning off an ad with 0 leads. If you have 0 leads and there is no automated rule, your campaign will still be working. We usually give the campaign time to spend the amount of about 2 prices of a lead and then we stop it. Meaning: if you are paid $5 for a lead, we stop at $10.
“Time range” - “Today”. 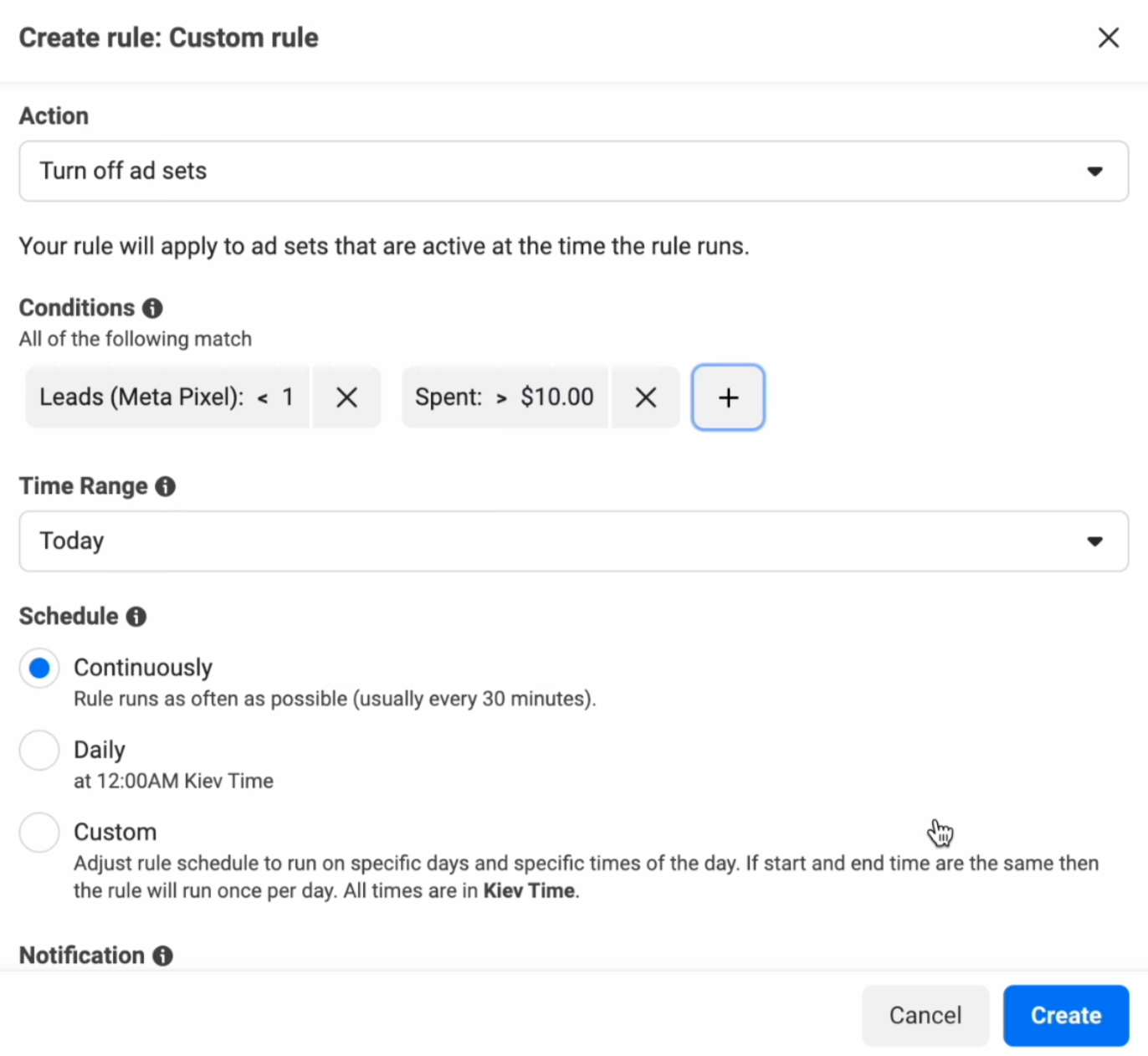 Turning on ads with new conversions. Sometimes pixels take time to fire leads. You see 0 in your stats, and your campaign is turned off thanks to the rule from the above. But then you get a lead, so it’s time to turn the ad back on. 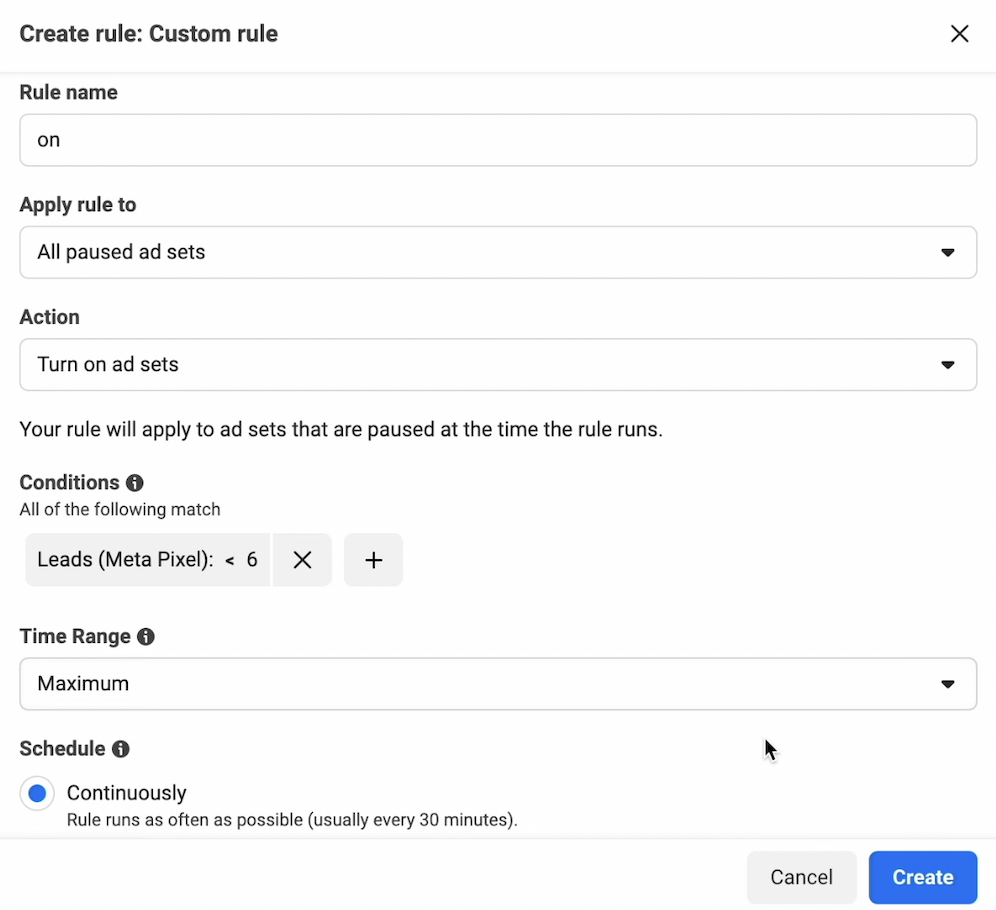 Turning on all ads. A new day can bring better rates at the auction, so if you don’t have time/opportunity to access the campaign, set this rule:
And Time range is on “Maximum” 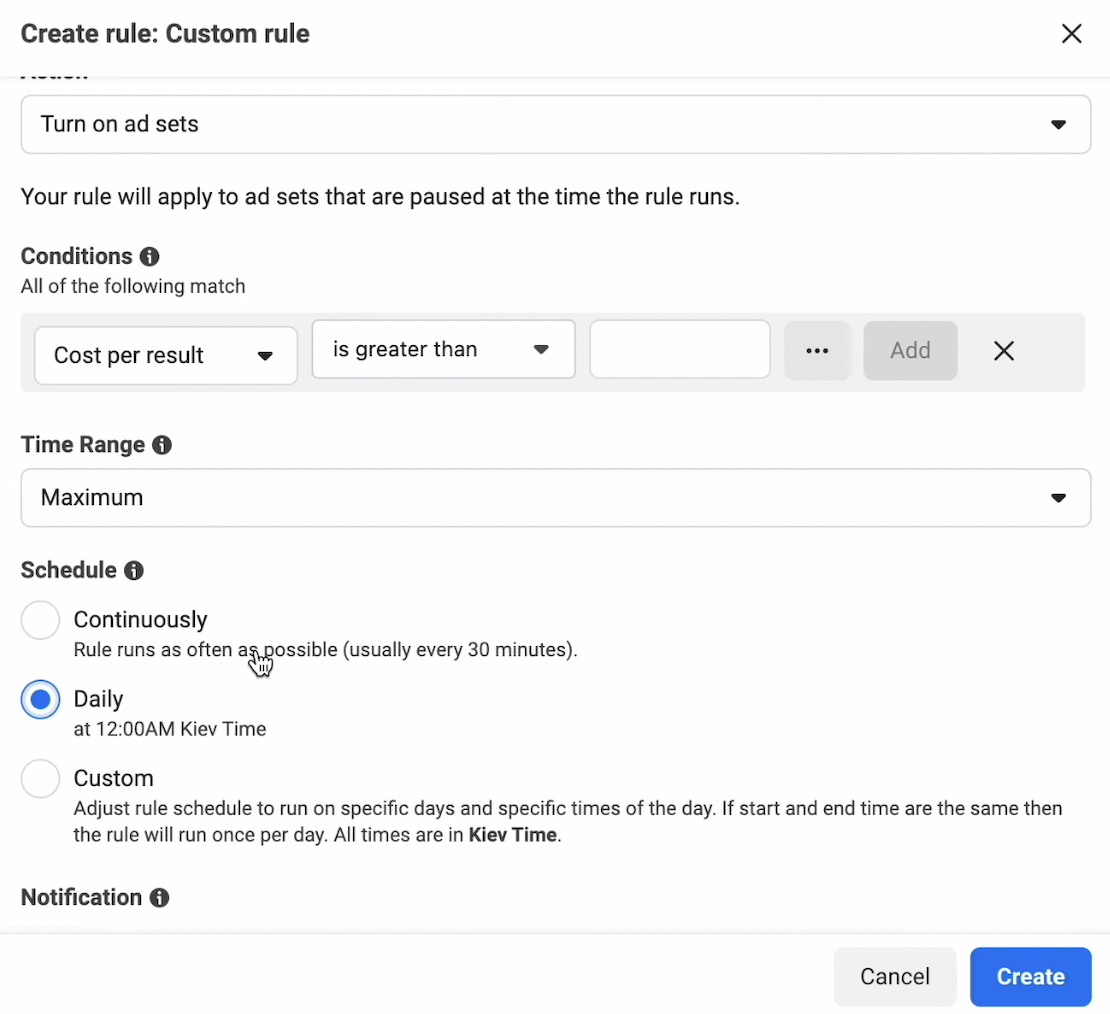 And… turning off the whole campaign. It’s basically the same as turning off ads with zero leads, except for: 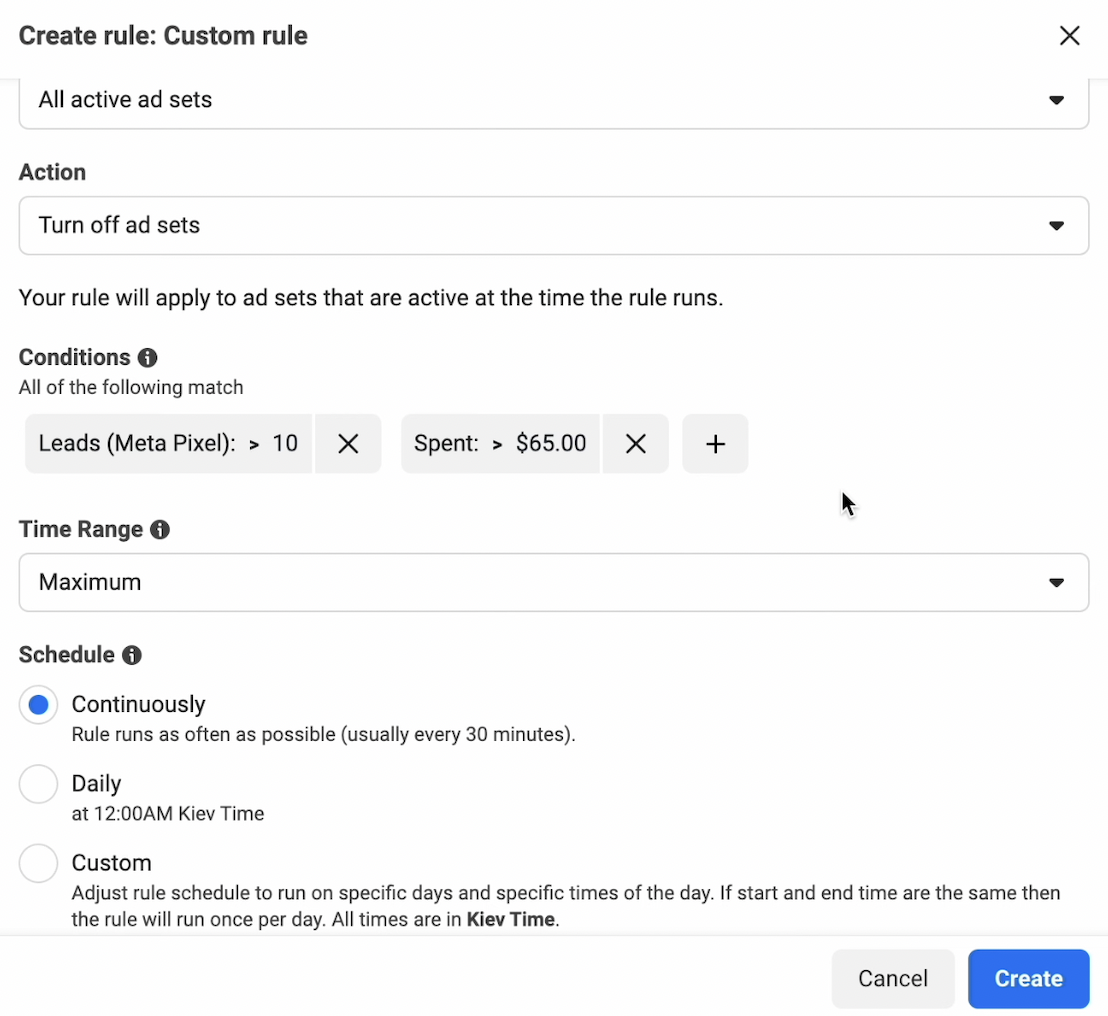 When do you optimize your campaign​

Automated rules are a useful tool that help to avoid wasting your budget during tests, but the optimization itself is a different thing.

You all know that Facebook has its own algorithm that based on the interests and audiences is searching for traffic that will convert. But as with UAC the algorithm needs time to learn. According to Facebook rules: 7 days and 50 conversions should be enough for the algorithm to start giving you leads for a good price. The longer the campaign is live, the more data the algorithm has to find the relevant audience.

Secondly, pay attention to ‘inspector’. Here we check the optimization process of the campaign at the ad set level. Because if we talk about optimization, we usually think about groups of ads, not the campaign itself. Choosing the ad set here we can see the price of the conversion, their number each day, campaign’s dates, money spent. And the yellow part here is the learning process.

As you can see from the graphic, even after learning is completed, the campaign is still not consistent. Because consistency in targeting ads is more of an exception than a rule

One day you’ll have 5 conversions for $2,23, the next only 3 for $4,33. However, the idea is that after the learning process the campaign should work more or less consistently, which we can kind of see from the graphic (where there are no real big peaks and low falls).

Why do we draw your attention to this: for you to understand WHEN to start optimizing. Obviously, the rule ‘2-3 prices of a lead and I turn off the campaign’ does work. If the algorithm can’t find the audience for your offer or gives a big price for a lead - it’s better to turn off the ad, relaunch it and try optimizing manually.


Manual optimization: what to know​

Things can go the other way as well: the longer and the better the campaign is live, the faster it burns out. You’ve shown the creatives to everyone that could have possibly been interested. And you’ll have to make changes.

Manual optimization is basically turning off ineffective ads, changing target audience, creatives, texts, buttons, budget amendments, relaunching the campaign etc.
For instance, we open it and look through the campaign. There are two creatives that have been running for a few days, the second creative has given conversions, but is way more expensive than the first one. So we decide not to waste more money and just turn it off. And the one that was bringing some results for an adequate price stayed live. Here the optimization included turning off everything that we didn’t need. The same goes for ad sets.

P.S. Clickability of the first one was not great, but cheap CPM made up for it.

To sum up: launch campaigns, see if the algorithm is learning (if it is and the conversion price is okay, don’t touch anything). If the price is sky high, turn it off/relaunch/change the bid or creative.

— How do you know when it’s time for manual optimization?
— 3 to 5 days are usually enough to draw conclusions and turn off ads that don’t perform well. But it all depends on the budget. If the ad set got around 5k views and no conversion, even though the funnel is fine, then you should turn off the ad set. It can happen because the clickability of the creative is low or the audience is not appropriate. Or both.

— When is it the time to scale your budget?
— After the learning process is completed.

— Can you add new audiences and creatives to working campaigns?
— We don’t recommend it. But there is a ‘but’ here. For example, if your ad campaign is working with budget optimization at the level of ads, then you can add one more audience group to a separate ad set, and at the level of the ad set set a budget and launch one more group in the existing campaign. The same goes for creatives. But you need to remember that the algorithm will start learning again, so it’s easier to start a new campaign with this creative.

— What should you never change in a working ad campaign?
— Only budget. Don’t touch interests, audiences, age, because the optimization will stop working and the algorithm goes into a learning mode again. If you want to change something - better start a new campaign and make changes there.

— What do you do with a bad CR?
— Start a new campaign, set automated rules and the marginal rate.

Optimization in Facebook is usually automated, you just have to wait patiently. If we talk about manual optimization, then you need to monitor the campaigns, turn off everything that is not working and leave only those bundles that work best. If necessary, relaunch campaigns, remove everything you don’t need and then, add something new (which is also part of optimization).
That’s it. Tell us how you do it and don’t forget to follow us for more useful content.