Follow Along ZeroPark Contest - Thinking outside the box - Desktop Push

jonte said:
For this campaign I'm using the Voluum flow optimizer function with the setting on "Auto" mode. It's super helpful especially when I'm trying to manage close to 100 different flows.
Click to expand...

Impressed by that nice ROI. Hope you're able to maintain it

this campaign is really doing good .

any updates about this ?.

Alright, let's get into the end-of-month rundown! Since my last update I actually launched 2 new campaigns - they've actually only been running for 3 days and are showing some potential. I also resumed my original campaign (Campaign 1) last week as I received a decent pay-bump. This pay-bump made all the difference as it took the campaign from basically break-even to almost $1,000 profit in less than a week.

I'll start by posting my overall stats for this month on the 4 campaigns:

Wrap-up: Started strong but took a dip as I was focused on my higher-volume/more profitable campaigns on other traffic sources. At the time of my last update in this thread, I decided to pause the campaign but after getting a payout bump from the advertiser - I resumed the campaign with a substantial whitelist whilst keeping the auto-optimization rules live. Turned out fairly decently.​

​
Also as you can see, I neglected to cut LP2 earlier. LP1 is the clear winner and if the majority of the traffic was directed to LP1 then the profit/ROI would've been much higher. I believed I was biased because LP2 was actually the winner on this campaign on the majority of other traffic sources so I was subconsciously waiting for LP2 to catch-up/overtake LP1 which obviously didn't happen. Take your feelings/biases out of the decision-making process, this is a clear example of why!!​ 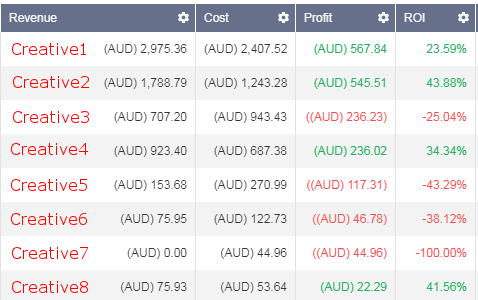 ​
Additionally, I should've cut Creative 3 and 5 much earlier than I did. Potentially even Creative 1 but day-to-day the performance between creatives varied a lot. It's easy to look at the monthly stats view and chastise myself for not cutting creatives sooner. The other thing with push is that creatives need to be updated all the time or you'll suffer from banner-blindness. Creating unique creatives is superior to copying what you see on Adplexity. Even if you're not the best graphic designer - it's better to have a unique creative than a creative that's been seen a million times. Speaking of which, I made a blog-post the other day showing you how to make free, professional looking logos for LPs and creatives. Check it out HERE​
I'm working on the write-up for Campaigns 2-4 currently. Stay tuned over the next couple of hours.

Wrap-up: Started strong but fell away towards the end of the month. Not quite sure why but the offer has been around for a while and their MIDs tend to be a little bit inconsistent at times. Despite the low ROI, I managed to get 10,300 Monetizer push subscribers from the traffic along with ~5,000 push subscribers to my own database so the gross profit is actually much higher.​
Campaign 3 (T1 GEO):

Wrap-up: Last A few days ago I got hit-up by a sweeps advertiser I used to do good volume with saying that they've freed up some cap on 2 of their top offers in this particular GEO. I quickly setup some campaigns and let it rip. It's still early days with this particular campaign, however I think I'm going to pause Creative 3 as Creative 1 has a far better CPA ($8.47 vs $31.09):​

​
Additionally I am also about to cut LP2 and just leave LP1 running as you can see from the performance:​

​
Definitely a promising campaign! Will keep it running and see how it goes. I'm thinking of continuing this follow-along by posting updates every so often here and on my blog, KeenAff.​
Campaign 4 (T1 GEO):

Wrap-up: Similar to Campaign 3, it's the same advertiser's offer in the same GEO - just in a slightly different niche. This campaign hasn't done as well thus far but I've already identified some tweaks I can make to boost the ROI - namely removing LP1 and LP2!! What was I thinking?​

To be honest, I actually hadn't even drilled down into this particular campaign until now to get the screenshot, haha! I'll at least remove LP2 for now and keep a close eye on LP1. Another campaign with great potential!!​
BONUS! LP Traffic Stealer :

On a few LPs I've been using on my ZP campaigns during this follow-along, I've hidden a traffic stealer script. These LPs have been ripped a number of times and I've included a screenshot of the performance from 2 of the thieves. The main culprit has netted me a cool $480 in the past week, not too shabby! Watch out

Big thanks to everyone for following along with my follow-along! This month has been extremely busy for me so I apologies for the sometimes slow updates. I hope I've given some of you a few handy tricks which you can apply to your own campaigns. Automation is key - these campaigns would've most likely been big money pits if I hadn't been running my auto-optimization scripts to keep them green throughout this busy month.

As I said, I'll most likely keep this follow-along updated intermittently both here and on my site - KeenAff - so stay tuned! If you have any questions, please reach out - I'm happy to help and am always keen for a chat about all things Affiliate Marketing.

amazing results. I am really excited.

Just a quick question from this campaign. What do you think the main factor in your amazing campaign? is it the automations? offers? creatives? or Landing pages? How do you manage to find this offer?

Just a quick question from this campaign. What do you think the main factor in your amazing campaign? is it the automations? offers? creatives? or Landing pages? How do you manage to find this offer?
Click to expand...

Thanks mate! I definitely think the success is due to already knowing what works because I was already running the same campaign profitably on ~7+ other traffic sources at the time I launched the ZeroPark campaigns. So I already had the top Landers, creatives, etc. Of course I also made sure to keep updating my creatives as I mentioned, but knowing what's worked well in the past is useful when creating new angles/designs. Additionally, my auto-optimization rules were a life-saver because most of my attention was focused on other - higher-volume - traffic sources so having the rules blacklist placements for me was very helpful. For your question on how I found this offer, I have a good relationship with advertisers and affiliate managers who trust me and vice-versa. Whenever there's a new offer with potential or an offer that's performing well in my designated verticals/niches - they'll generally message me to tell me about it. I also have reputation as an affiliate who will try pretty much anything, and get it up and running very quickly, if I think it has promise.

As for the campaigns I launched last week, I had a decent blacklist from similar ZP campaigns I've run in that GEO in the past which prevented me spending too much on bad targets/sources from the get-go.

Community Leader
Great follow along and nice wrap-up
Interesting to hear about how well the stolen LP's have done for you, think that is something I will definitely be introducing to my LP's soon

agentf said:
Great follow along and nice wrap-up
Interesting to hear about how well the stolen LP's have done for you, think that is something I will definitely be introducing to my LP's soon
Click to expand...

Thanks mate! If you can make a good enough script and embed it properly then it'll most likely do well haha 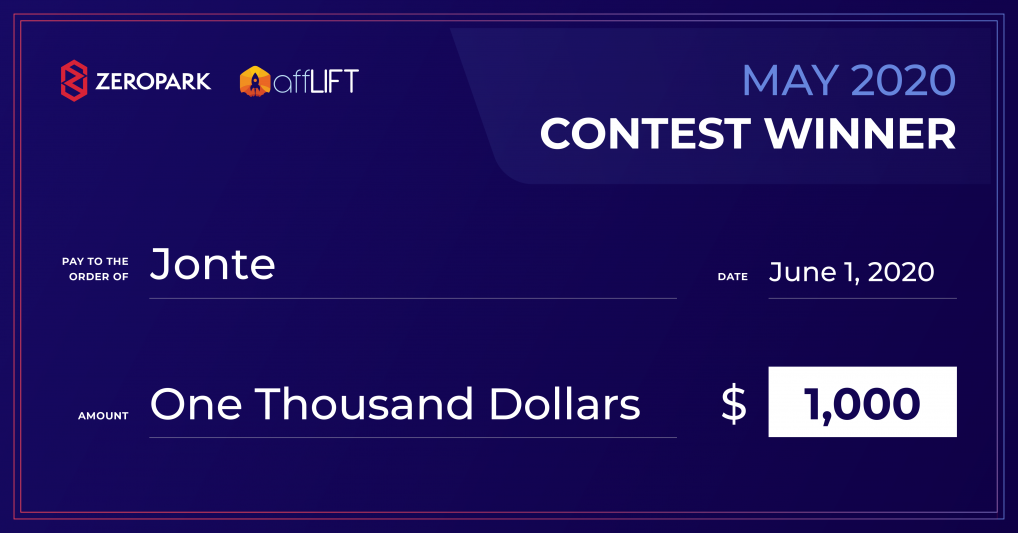 First off, thank you every who participated in our contest with Zeropark! The contest was a huge success and I want to thank @Zeropark for making it interesting by providing such awesome prizes. Well, it's time to announce the winner of the biggest prize... The "Best Follow Along" award. We...

Can you please show us examples of landing pages that were used?

congrats @jonte !
You must log in or register to reply here.

🔥 Monetize your traffic on Push Subscriptions with Clickadu 🔥

Zeropark campaign, am I going in the right direction?

A
Question about ZeroPark's optimization