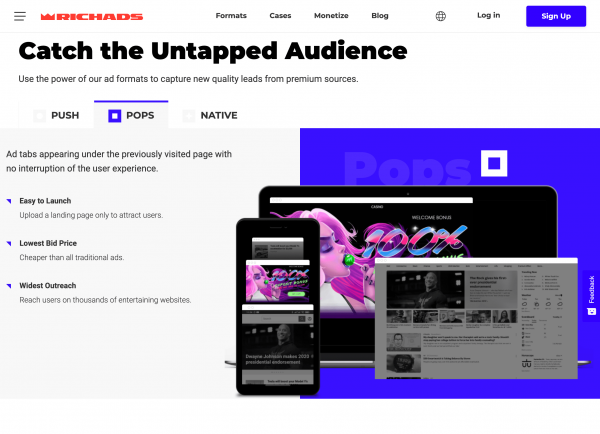 https://richads.com/
Formerly known as RichPops, RichAds Pops is a self-serve ad network that can be used by any advertiser to generate conversions for any niche. While RichAds is still a relatively young traffic network, it does not lack in features and traffic volume that media buying affiliates are looking for.

RichAds Pops boasts of delivering four billion ad impressions every day, coming from 220 countries and territories worldwide. Ad views are paid by the thousands, with the minimum CPM bid going for as low as $0.30.

Rules-Based Optimization
If you want to spend more time finding the right offers and creating new campaigns, then optimization tasks can be a burden for you. RichAds helps ease your burden by allowing you to automatically optimize your campaigns based on rules that you set.

This optimization feature is based on an If-Then-Else function and can be based both on monitored parameters and calculated metrics.

Target CPA
If Rules-Based Optimization is not enough, you can make your campaigns run completely hands-free through the Target CPA option.

Target CPA is a cost-saving tool that automatically identifies sources with the best conversion rates and prioritizes them over less fruitful ones. Your cost per conversion will be reduced, plus you can get a higher volume of targeted traffic for less money.

Don't have time to test which sources perform best? Immediately opt for Premium and New sources from the get-go. These sources are proven to perform well based on RichAds own tests, although the traffic from these lists also comes at a premium price.

Use Standard and Remnant Traffic for campaigns that are meant for scaling and those that rely more on the traffic volume rather than the quality.

Micro Bidding
If you've found sources that convert well for your campaign and you want to place a unique bid for them, you can utilize the Micro Bidding option. With this feature, you won't have to create a new campaign with whitelisted sources.

This feature can also be used to assign reduced bids to specific sources so you can still receive traffic from them at a lower price. It eliminates the need to completely disable a traffic source prematurely.

Multiple Account Levels
The more you spend on RichAds Pops, the more benefits you get. The platform has established three account levels for users, and these are:

RichAds Pops has provided three funding options to ensure that you never have a hard time adding money to your account. These are:
The minimum deposit is $100.

RichAds has generously given affLift users a first-time deposit bonus to the tune of 12%! Visit the Affiliate Marketing Promo Codes and Coupons thread to get the exclusive coupon code.
Likes: jimmyvanilla

I was had very bad experience with them. I just waste my first time deposit on there platform. I know results may vary person to person. But it was not good for me.
View more