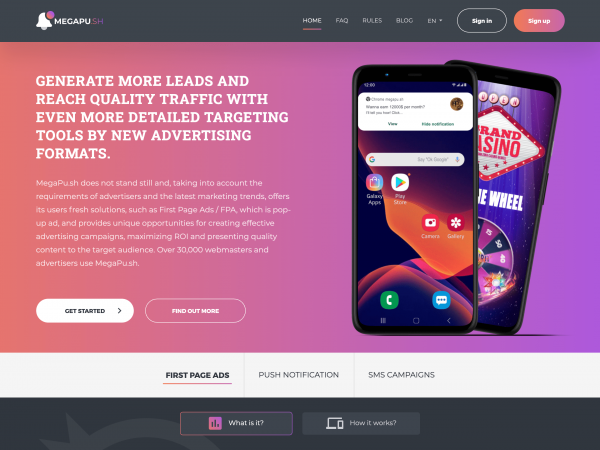 https://megapu.sh
If you are thinking about trying push notification traffic to promote your offers, what better place to start than with the pioneer? MegaPush claims to be the first in this space, having been established between 2017 and 2018. It is a traffic network that focuses solely on push notifications for mobile and desktop.

Being the first in the arena can be a huge deal, as MegaPush is one of the biggest providers of push notification traffic. This Russian company offers a staggering 12 to 19 million clicks per day.

If you’d like to take part in this pie to promote your offers, here are some of the things you need to know about MegaPush.

MegaPu.sh is very candid about their traffic, making it easier for potential advertisers to plan ahead. The company works with Leo Cash, Bad Boys Network and several other networks to collect their leads. This lead to an audience dominated by males, taking up 80% of the population, and only 20% are females.

The audience distribution is as follows:
The audience interests are dominated by the following:
The top verticals for this traffic network are:

MegaPush utilizes a CPC model, which means you only pay for every click that your ad has acquired. They offer traffic from all over the world, with a minimum CPC of only $0.001.

Their dashboard is very simple and intuitive. Similar to other push notification traffic providers, MegaPu.sh requires an image with the size of 492x382 pixels. You can also upload a larger or smaller image, provided that it has a ratio of 1.5 (width) to 1 (height). Icon sizes must be square at 192x192 pixels. Your ad space also comes with a title that has a 30-character limit, and a message with a 45-character limit.

They provide the recommended cost-per-click upon campaign creation, which largely depends on the target country. The CPC displayed is based on cents; which means if the CPC indicated is 1.50, you will be paying one and half a cent per click.

If you need to pinpoint specific users, you can do so by targeting via OS, country, platform, browser, and carrier. You can also choose where your traffic is coming from by clicking on Feeds and enabling/disabling traffic providers. Aside from MegaPu.sh, the Feeds list includes AdMaven, Adsterra, and several other push notification networks.

There are two ways to place a limit on your campaign:
You can also schedule a start and end time for your campaign. Once you have finished setting everything up, you can submit the campaign and wait for moderation. Approval takes an average of only 30 minutes since MegaPush has a 24-hour staff from Mondays to Fridays. On weekends though they are only available from 8 am to 5 pm (GMT +3).

If you have additional questions or if you need assistance with your campaigns, you can utilize the live chat feature on their website.

This traffic network also offers a full tracker free of charge. This means there would be no need for you to use a third party tracking tool since you can create, manage and optimize your campaigns within your MegaPush dashboard.

You can also use these tracking tokens to help track and optimize your MegaPush campaigns:


Finding out if MegaPush’s traffic works for you is easy since they have a low minimum deposit of only $100. They accept Visa, MasterCard, WebMoney, Bitcoin, PayPal and more, so adding funds will not be a problem. If you’d like to try a high volume and well-converting push notification traffic, MegaPush should be high on your list.

@ggupta this is a common issue. If you search the forum for MegaPush you'll see other people talking about it too. Feel free to make a thread or discuss it in those threads to help try to resolve the problem.
View more

I don't think megapush is active anymore, need to check out if they still provide service to clients
View more