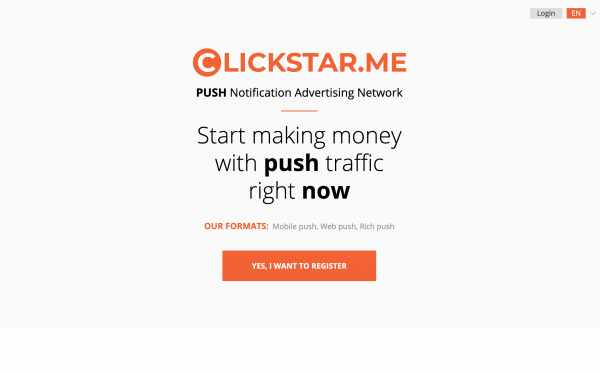 https://clickstar.me/
Despite many predictions that push notification ads will immediately fade out due to Google’s interference, this traffic type is still standing steadfast, at least for now.

So while push ads are still here, why not test it out for yourself?

One push traffic source that you can easily join is ClickStar. This company just opened its doors in 2019 but was able to collect enough publishers under its wing to be able to push millions of ads.

Whether you are looking to promote your offers using mobile push, web push, or rich push ads, you’ll find that there’s enough volume in ClickStar. This source averages one billion impressions and three million clicks on a daily basis.

Their ad volume comes from more than 10,000 publishers who deliver traffic from 230 countries around the world. Bidding starts at $0.001 per click, although the average winning bid is $0.02.

To see the estimated available traffic volume as well as the average CPC and click-through rates per country, visit the Opportunities tab in your dashboard.

Creating a campaign within ClickStar is a pretty straightforward process. Now if you’d like to reach people who will most likely respond to your ad, then you need to narrow down your audience using their targeting filters.

The following are the available targeting options:
It is also possible to target users based on the length of their subscription (how long since they agreed to receive push notifications). You can choose to receive traffic exclusively from ClickStar or you can include third-party providers.

Finally, you can limit the number of times a user sees your ad per hour, day, week, or even month.

It is possible to allow ClickStar to optimize your campaigns for you with the help of their Smart Bidding technology. To use this tool, you must first set-up either S2S tracking or pixel tracking so that ClickStar can record conversions.

Once the conversion tracking has been sorted out, you can start creating a campaign with rules on which sites (also called a hash) or sources (also called feed) to block based on clicks and conversion performance.

You can also add a rule regarding increasing or decreasing bids based on the conversion rate and conversion value. There is no limit to the number of rules you can place for one campaign -- just make sure that they do not contradict each other.

To fund your account, you can use WebMoney, Capitalist, Paxum, Visa/Mastercard credit cards, or you can top up via bank transfer. The first deposit must be at least $200, while succeeding deposits can be as low as $50. If you will be replenishing your account via bank transfer, the minimum will always be $500.
Likes: Henderis