Guide PropellerAds Optimization Based on 1 Conversion


I am happy to announce that I have a conversion on this campaign from May 1st! This was my first screencast I did for the Forum. I used PropellerAds, Voluum and Apple Music *laughs* and then it equalled ‘not profit’.
I actually mentioned somewhere in this thread I believe, or in the video that with the Apple Music Campaign, it converts on a Trial. So, somebody clicks on your link, it takes them to Apple Music. They probably won’t start their Trial right then is what I have found; but eventually/hopefully they will start a Trial. In this case it took two weeks, but I did have one conversion. (Which you can see in my PropellerAds account because I set it up so the postback would fire on PropellerAds, as well.)

So I got a conversion. I posted a screenshot in here of the click:

On PeerFly, we show the click time and the conversion time. The click was on the 2nd and just this morning, on the 14th, I got the conversion. I could have started to optimize this campaign, honestly, without this conversion. But obviously, the conversion helps encourage me - and I hope it would help encourage you too - to kind of dig a little bit deeper into this campaign. I did pause it after I had spent about $36, so I am still not ROI positive - by far. Hopefully I’ll see some more conversions come in. I am going to restart it again, on a limited budget to try to get more data, once we do these little optimizations.

When you go to your Dashboard on PropellerAds and you click your campaign, you can start to do some optimizations here:

It’s showing this Zone ID because that’s when I got the conversion on, and that was just today. So, I actually want to show for the last 30 days, so that I can see all of my data (I don’t care about those Fortnite campaign; and here we go!):

This is the data from PropellerAds on my campaign. This is really nice that PropellerAds gives you this functionality. I pass-in the conversions using the PropellerAds’ postback, so that I can optimize directly on PropellerAds. I can also do this manually through PropellerAds and setting up my Campaign - going into the campaign settings and revoking/removing Zone IDs that I don't like and looking at the other types of optimizations that I can do directly in PropellerAds. I could do that manually, but it’s just nice that it’s automatically in here. 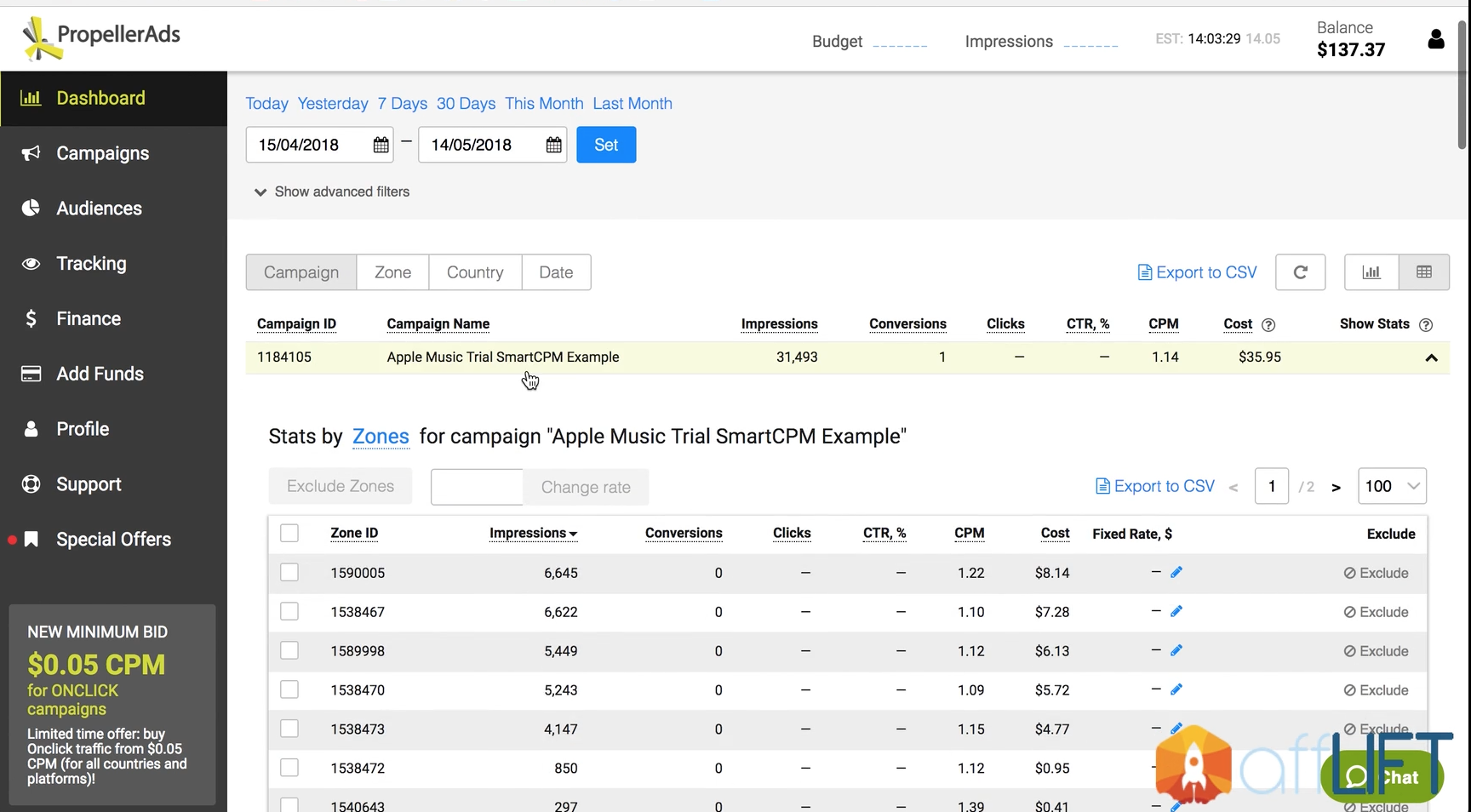 Plus, when you’re doing the SmartCPM bidding like I am; your bid will fluctuate, but you can actually go in and set a fixed rate: 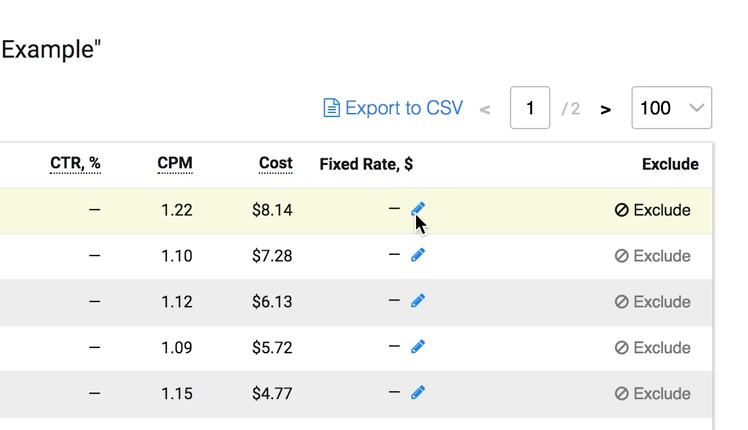 If I wanted to adjust my bid so that i was only spending $0.32 CPM on this, I could do that. I’m not going to get very much traffic. But I could do that if I really wanted to, instead of doing the Smart Bid.

With my optimizations in PropellerAds, I want to first look at the Zones, then well look at the other statistics here that I talked about. Zones are most important in my eyes, so I always start with the Zones. We have a few days worth of data here; 31,500(est.) clicks. This offer pays $6 per conversion, so I want to blacklist Zones that are not profitable right now - who I’ve spent more than $6 on is what I’ll do.

I want to exclude this first one. I’ve spent $8.xx and zero conversions. I’ll exclude that:

That’s going to automatically exclude it in my Campaign settings.

This one is just below my threshold, I’m going to allow that one to keep running. It’s also the one with the lowest CPM.

So that I don’t waste any more money on this campaign than I need to and to collect more data, I’m just going to remove these ones since I haven’t had a conversion on them and I’ve spent 1x my payout.

Let’s take a look at this other data though - well, first let's drr which Zone I got the conversion on. If I click ‘Conversions’ here, it’s going to sort.

It’s showing the conversion happened on this Zone ID. I only had 25 impressions, so I didn’t even have to really pay anything for this conversion, which is pretty cool. It says I paid $0.03. If this Zone is able to maintain this nice conversion rate and I’m able to buy more traffic from it, I’m going to be a rich man. I do not expect that to happen, but we’ll see. Before I go and get crazy and put all my money on this one Zone ID, though, I do want to collect some more data first.

*Begin off topic* Since these stats are staring us in the face, I just want to talk about them right quick. Since you probably have questions and notice that I am ignoring them:

I setup this campaign, three different GEOs, right around the time I did the Apple Music Campaign. This offer turned out to be complete garbage and I wasted $20 on it. I’m not overly concerned about it, that’s going to happen. I just figured I’d bring that up, since it’s staring us in the face. *end off topic*

The Browser is probably going to be the defining factor here for me. This is pretty cool, I’m still sorted by conversions. Google Chrome, I’ve got hardly any Impressions and one conversion. Apple Safari, which is the default browser for the iPhone, I’ve got a ton of Impressions and zero conversions. Should I blacklist this browser? That is up in the air. It is the default, so most of it’s traffic is going to come from there. This one conversion could be a fluke. You guys have probably heard me, if you’ve watched any of my other videos, I always consider one conversion could always be a fluke.

Example: Random person landed on it, and converted. That doesn’t necessarily mean that Google Chrome is going to be my best converting browser. Do I want to remove everything, BUT Google Chrome? I’ll consider that.

Mobile ISP, probably not a lot of data here: 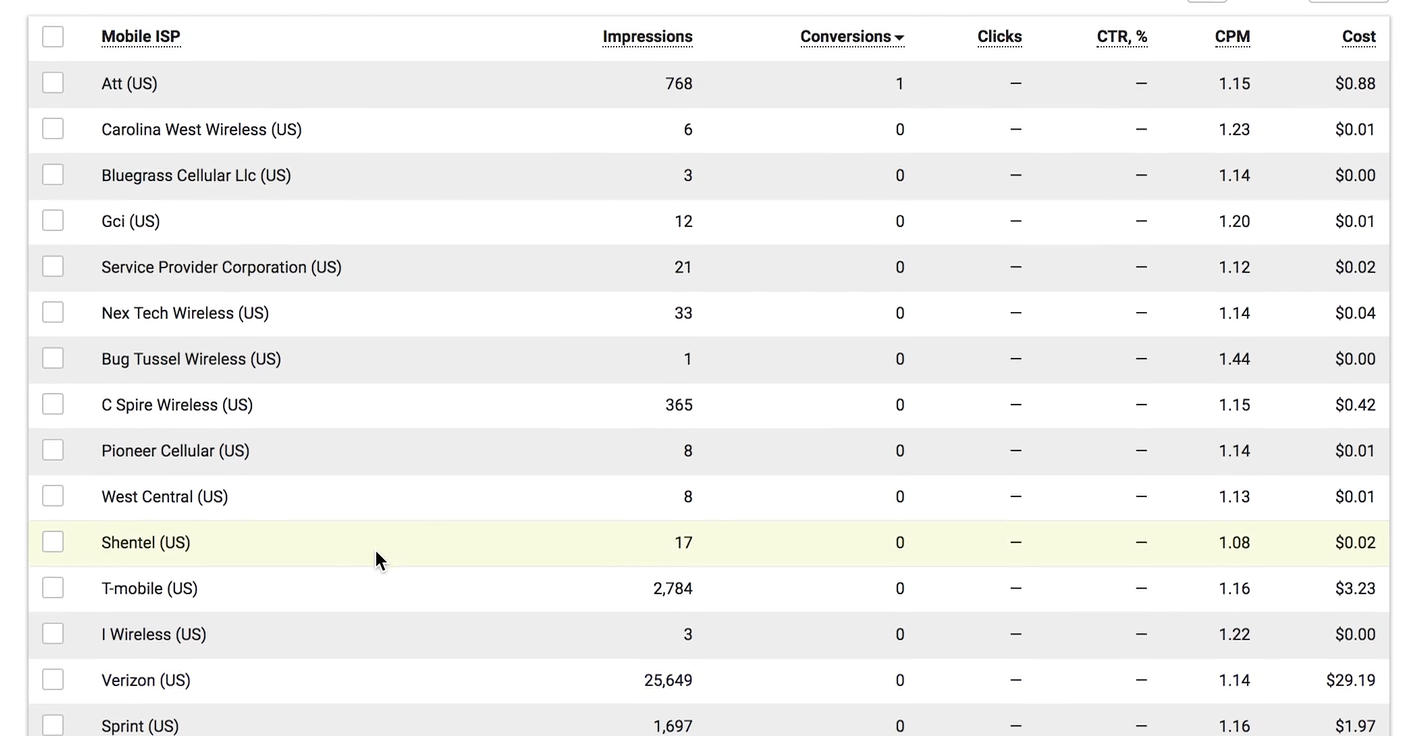 AT&T got the conversion for me (that’s awesome) - Verizon sucked (that’s going to happen). Here’s another one where the data is staring me in the face; should I get rid of Verizon? Obviously, it did not perform well. Is it time to get rid of it? I don’t know.

The OS Version, we can take a look at that: 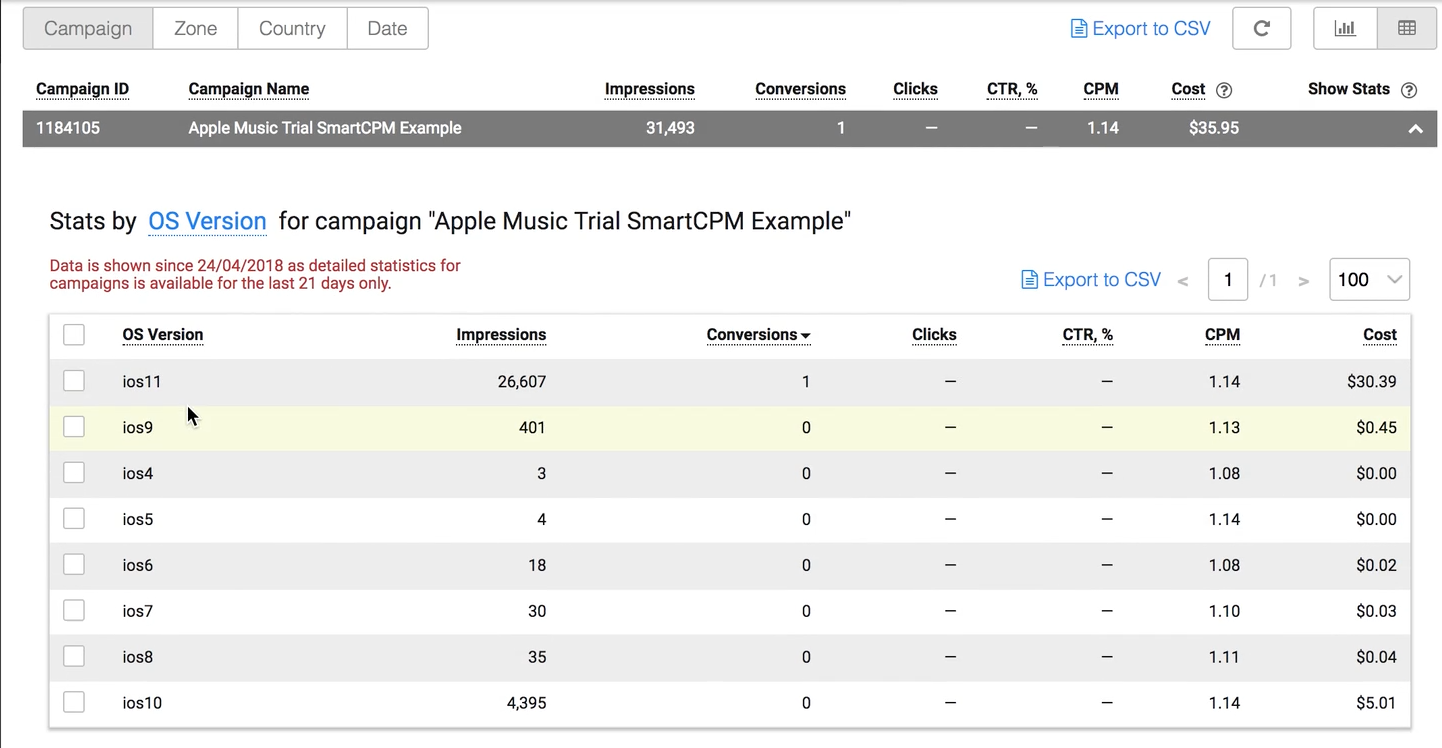 The newest version is what converted. It’s the one I got the most traffic with as well. I didn’t really get traffic under anything else, besides the previous version of iOS 10. I don’t think I will remove that one either.

We really still don’t have quite enough data, in my opinion, to do too much optimization. I can go in and remove everything except for Chrome. I could test that, because like I said, I don’t really want to spend too much more money on this. If I am going to blacklist an ISP, I should just blacklist Verizon.

Let’s go ahead and fiddle around with some of this data. I click Campaigns (from the side menu), clicked on the campaign, it’s manually stopped right now. You can see it actually, already removed the Zones that I excluded. That’s how that optimization process works in the dashboard when you are editing your campaign:

If we click ‘Edit Campaign’, though, we can in and go a little bit deeper.

Here’s where we can do ‘Exclusions’:

Let’s say I want to Exclude Verizon, because that was the one that was expensive for us:

You can click that, and click ‘Exclude’. Now it’s going to include everybody except for Verizon. If I only want to include Google Chrome, then I can do this.

This would ‘Exclude’ Google Chrome:

This is making it so it is the only one that I get traffic from:

This graph is going to update with my new estimated traffic, which obviously, I destroyed the total impressions available by doing these exclusions and inclusions. That’s okay; for this campaign let’s just see what happens. My impressions are going to dip significantly. I’m aware of that - that’s okay. I may want to increase my bid a little bit higher since I’m supposedly optimizing so that I should be getting better traffic. 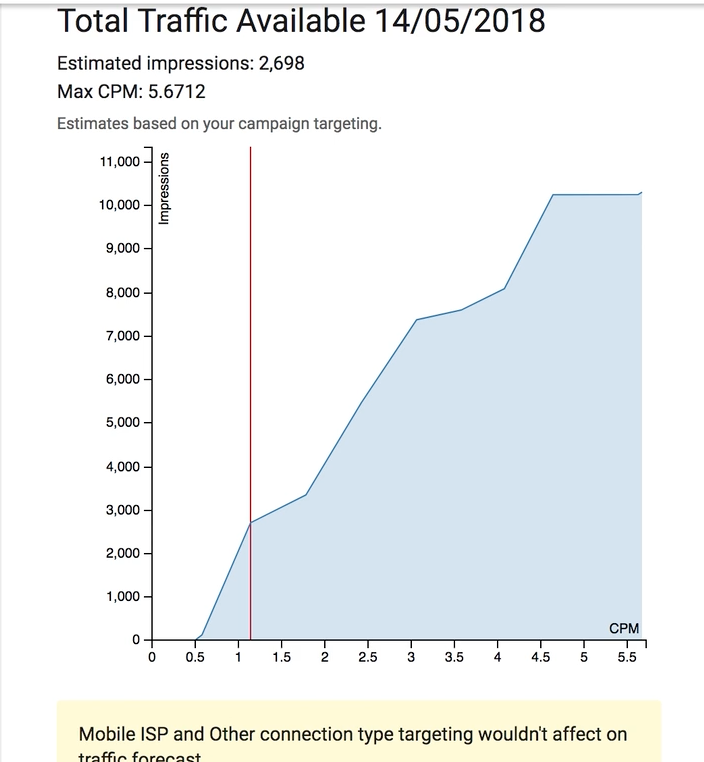 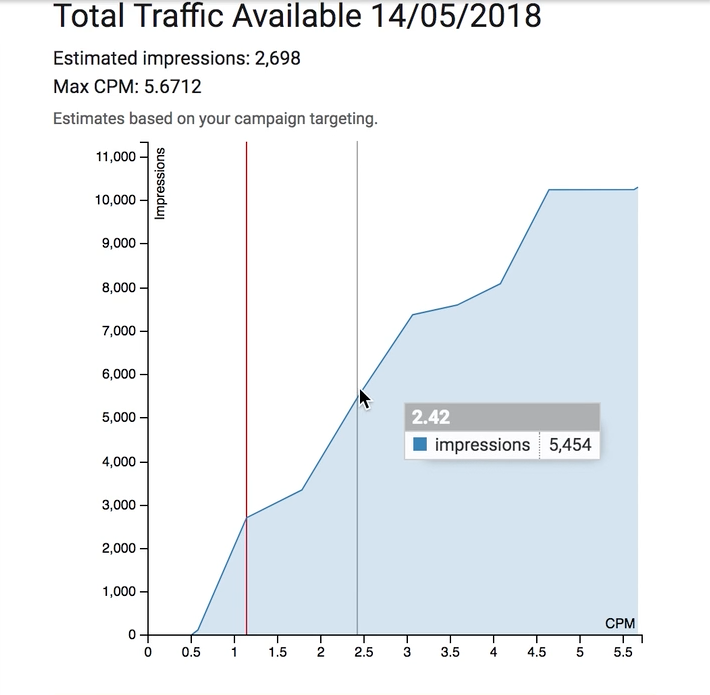 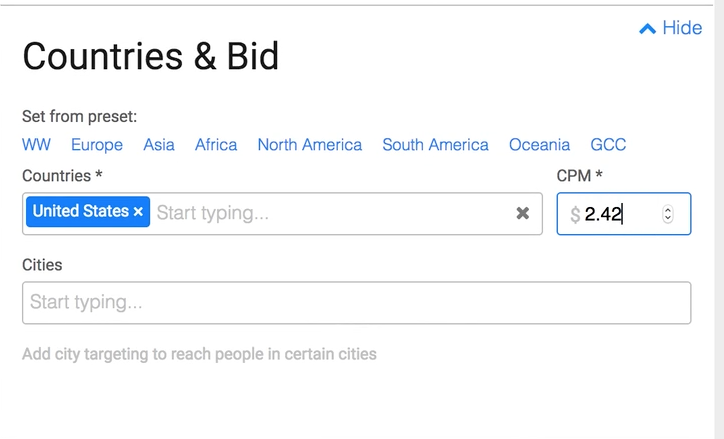 We’ll spend a little bit more and we’ll see how it looks. We’re still doing the SmartCPM so hopefully it should still be smart with my bids for me - I’m just increasing my max. I don’t think that I’ll go over my daily budget. Let’s see what happens, it can’t hurt. *click* Save and Start *click* 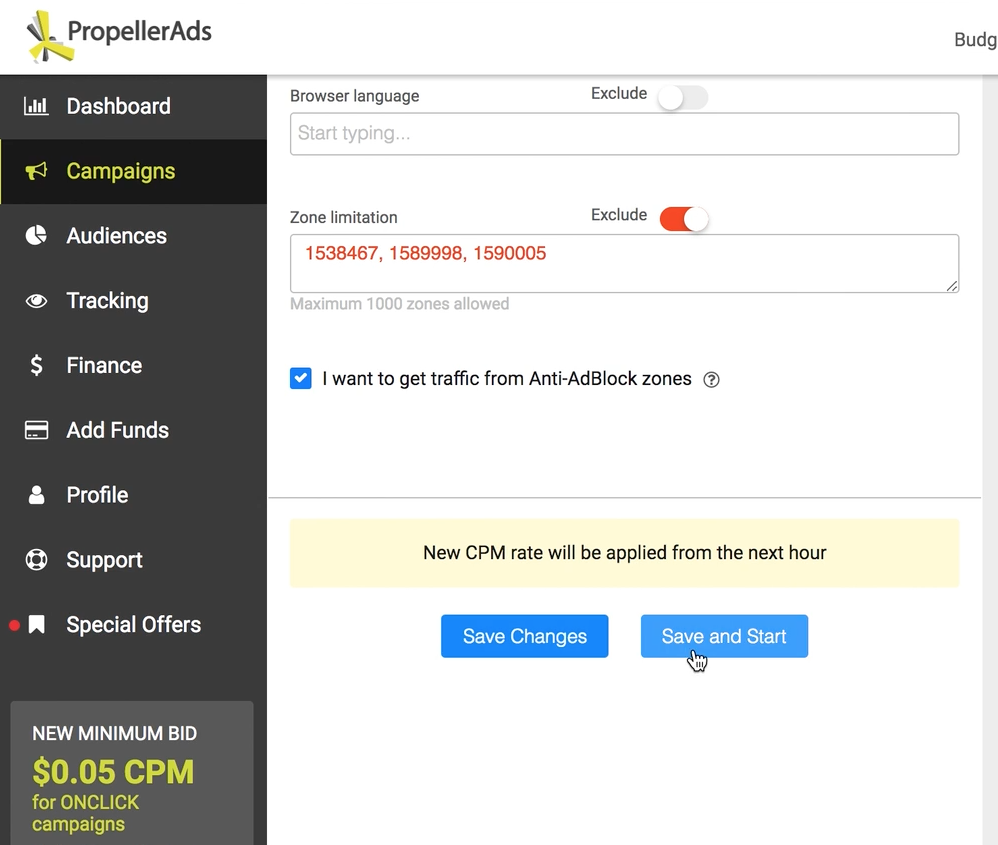 Again, with this campaign, you have got to be patient. I am probably going to get - even if I go through my budget today, which may not happen because of my exclusions and my specific inclusions - let’s just see what happens. Hopefully, over the next couple of days, I’ll spend $20 more and we’ll see a couple more conversions come in. So, DO THOSE OPTIMIZATIONS.

I just wanted to show you real quick in Voluum how you can take a look at the same data. This is the 30 days for this particular campaign in my Voluum account - because that’s what I am using to track the campaign.

If we go to ‘Variables’ and look at ‘zoneid’, we should see exactly what we saw. This is sorted by conversions. That's the ‘zone’ that has a conversion. I am super duper profitable on it - that’s cool. If I click on ‘Visits’ here, it’s going to sort by the ‘zoneid’ and which one I spent the most money on:

These are pretty much the same as what it showed in PropellerAds. I’ve blacklisted those three. I shouldn’t get any more traffic from those and hopefully the other ones will start converting.

If I wanted to look at some ‘day part’ data, I could, but that would be pointless because we only have one conversion.

We can look at the browsers that we just looked at too. Google Chrome - Mobile Safari is the one that didn’t work, so we removed that to focus on Chrome.

Then we should also be able to look at the ISP (Connection -> ISP / Carrier).

We should see Verizon. This is all the same data as what we’ve already seen in PropellerAds, but it’s good to also have it in your Voluum account. Sometimes it’s a little easier to go through.

So, I have started the campaign back up. My bid will adjust in the next hour:

Hopefully, we’ll start getting in some more traffic and I’ll see a few more conversions. Once I do, I’ll do a follow-up video. Thanks guys!

Staff member
Thanks Brandon
You must log in or register to reply here.
Top