Guide Another look at our PropellerAds Apple Music Campaign


Hey everyone, I wanted to take a minute to take a look at the Apple Music, PropellerAds campaign that I’ve been using as an example this month for PropellerAds. Originally I setup the post and video to explain how to setup a campaign on PropellerAds, and then I did a video earlier this Monday showing some of the optimizations that I had made. Now I want to do a follow up with even more optimizations. Because if you’ve been following along in the threads, you'll know that I've been getting conversions. Originally when I ran this campaign I think I spent around $25 or $30 and I hadn’t gotten a single conversion and I paused it because the payout is only roughly $6. So I paused because I wanted to wait and give it time to see if I had any conversions come in after-the-fact. I said right away when I started running this in my first video, that with the Apple Music Trial offer that I’m running thru PeerFly it takes time for conversion to come in sometimes - that's been my experience with this particular offer.
So I think my first conversion was two weeks after the initial click happened. Now I’m starting to see more come in. I’m at five conversions so far - not a ton, but it's better than none. Originally I spent $25-$30 and didn’t make any money - and now I’ve spent $60 and made $30. So while I’m still negative, I am starting to see some results from my campaign. A lot of that has to do with the optimizations that I did. So I went thru and optimized with you guys - showed you in the video, I removed a few different internet service providers, made it so I was only getting traffic from Google Chrome, made a few different changes. We even blacklisted or excluded a few websites. Since then, I have added those back because of the other optimizations we did I figured we might as well let those websites send us traffic and see if it ends up converting. The campaign is still negative, but I am starting to see some conversions come in. In fact, if I run this report for the last 3 days for this campaign, you can see I’ve got 2 conversion and I’m starting to close the gap a little bit.

I wanted to go through this campaign and do some more optimizations with you. The optimization process never really ends. We are trying to get the optimal traffic to the offer so that for every penny we are spending, we are increasing our odds of seeing a positive return on that penny. With this campaign, it’s been about just being patient. You have to wait. Earlier today the conversion I got was from 3 days ago. That’s pretty cool, at least it wasn't a two week gap. The few other ones I got; this one you can see the click was on the 14th the conversion happened on the 16th:

Here’s where the click was on the 15th and the conversion was on the next morning on the 16th:

So, conversions are starting to come in a little bit more consistently. Hopefully, that will continue to happen and we’ll be able to get this thing profitable.

Take a look for the past 7 days:

Here we go, the past 7 days I've spent $25.70 and I’ve made $24 - so I am not getting rich off of this campaign, but I am nearing profitability. Hopefully once it's profitable I’ll be able to maintain that for a while and make a decent ROI on it.

I like to use both PropellerAds and Voluum to take a loot at the data. The first think I want to do is take a look at the Zone ID’s. These are the websites that I am getting traffic from:

I want to look at all of the data so, the past 30 days would be everything since i started this campaign.

In fact, if i do a date breakdown here (let’s break it down so that it’s in order): 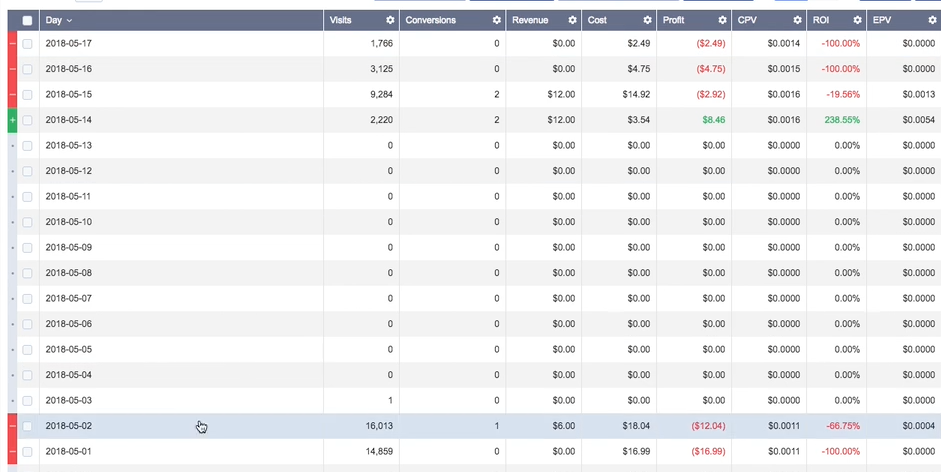 So I originally started this on the first. You can see these first two days were the two days that I did the initial testing. Spent $28-$29, only got one conversion and then I paused. Then I started seeing a few conversions come in, and that's when I resumed the campaign. I actually have a profitable day, that’s cool, I had a nice positive ROI here:

This is a more accurate depiction of the current traffic we’re getting and the traffic we want to optimize off of. For the Zone ID, this is the website that I am getting the traffic from:

This is in order, by how many clicks I’ve gotten. You can see that I haven’t really spent a lot of money on any particular Zone ID - and that’s because I have my traffic being filtered right now where I’m only getting the traffic that I think is going to convert best - which is Google Chrome and then a few internet service providers. If we click on conversions:

We can see the few Zone ID’s I’ve had conversions on. These are my 4 conversions that I’ve gotten in the past week. Obviously, all super profitable, but not a ton of traffic from these websites right now. Hopefully over time I'll start to see either more Zone ID’s producing conversions, or these Zone ID’s giving me more conversions. We’ll just have to wait and see.

I don’t think there is anything to optimize here, I don’t want to exclude any particular Zone ID right now because there is just not enough data based on the current traffic.

However, if we take a look at some of the other things we are optimizing on, like the browser:

We can also take a look at the OS version. This is the version of iOS that the user is running:

If we go to the campaign: 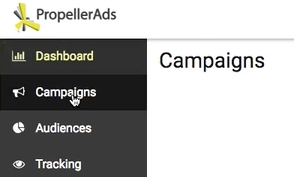 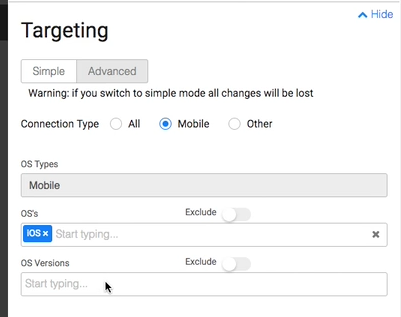 We can exclude versions or just include the versions that we want traffic from. iOS 11.3 is doing the best for us right now, 11.2 is not doing so bad.

We can see that these are the iOS versions that are costing us the most money that we are getting no return on.

We haven’t really spent a lot money on any of these to say “let’s exclude this one”, so we’ll just leave that alone and won’t fiddle with OS Version now. Down the road, once we have more data and more traffic we may want to setup a separate campaign bidding higher for certain OS Versions, if they’re going to perform best like this one:

Or we can just leave it alone for now and potentially blacklist ones that get a lot of traffic but don’t convert for us. We’re just doing iPhones so there is no need to do device.

I haven't got any traffic really, from the ones that I don’t want traffic from. I removed this after the fact - I had gotten this traffic before I excluded it:

So that is good that we added that back (Sprint Carrier). I don't think there is really too much more we can do with this campaign right now - I’m going to save this: 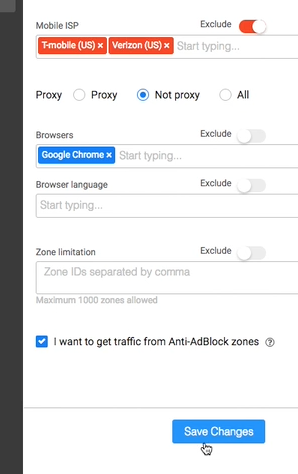 It’s weird, the graphics changed quite a bit since the last time we looked at this. This says if we increase our bid to just past where we’re at now we could expect quite a bit more traffic. We’re pretty close to profitable right now so I don't want to fiddle with it too much….But, this says we could potentially quadruple our traffic by increasing our bid to $2 and we’re already at $1.78 right now 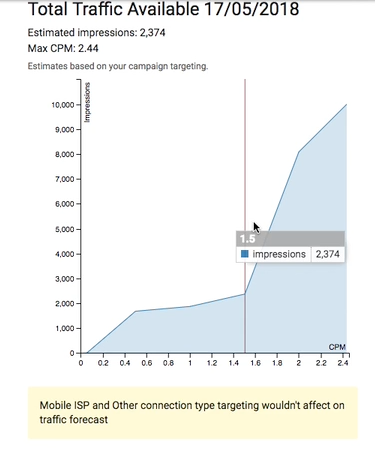 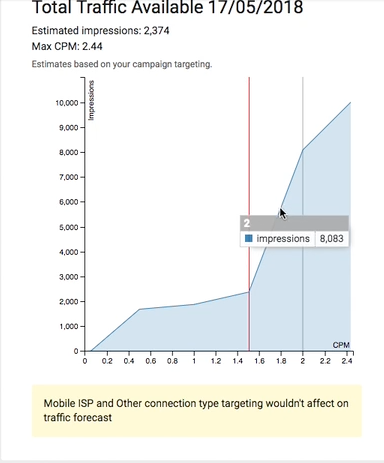 - Let’s go ahead and do that and see what happens:

Day-parting: We talked about how we can exclude certain times of the day, which I haven't done yet, but we’ll take a look. There’s not a lot of data here. We can sort it by the time: 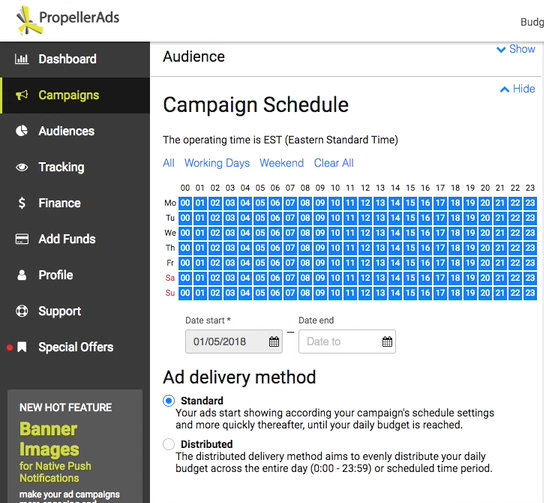 We really don’t have any times where we’re super negative. This one is the biggest:

We’re at about a third of the payout of the offer, so I don’t necessarily want to change this right now. We should just give it more time and collect the data.

I think we’re good - We'll continue to ignore these ISP's:

continue to focus on Google Chrome:

and hopefully the increase in our bid will get us a little bit more traffic.

That’s really all that I have for today. This campaign, like I said, is just all about taking patience. We’ve just got to wait it out. Hopefully, with time we’ll be able to get this thing profitable. We’re pretty close right now. Once we are profitable - once we have more data under our belts, I may setup a separate campaign in PropellerAds and just focus on the Zone ID’s and the other optimizations that we have that appear to be working (Ie. Google Chrome and those Carriers) and just focus on those particular Zone ID’s. Those particular websites so that I can increase my bid and capture more of their traffic and hopefully get a whitelisted campaign profitable right off the bat. That will help increase our ROI and take care of this money that we’ve lost in the testing phase. I think we're pretty close to getting this thing profitable, so it's pretty exciting. I’ll do another update in a couple of days, once we have more data and we’re good to go for now. Let me know if you have any questions.