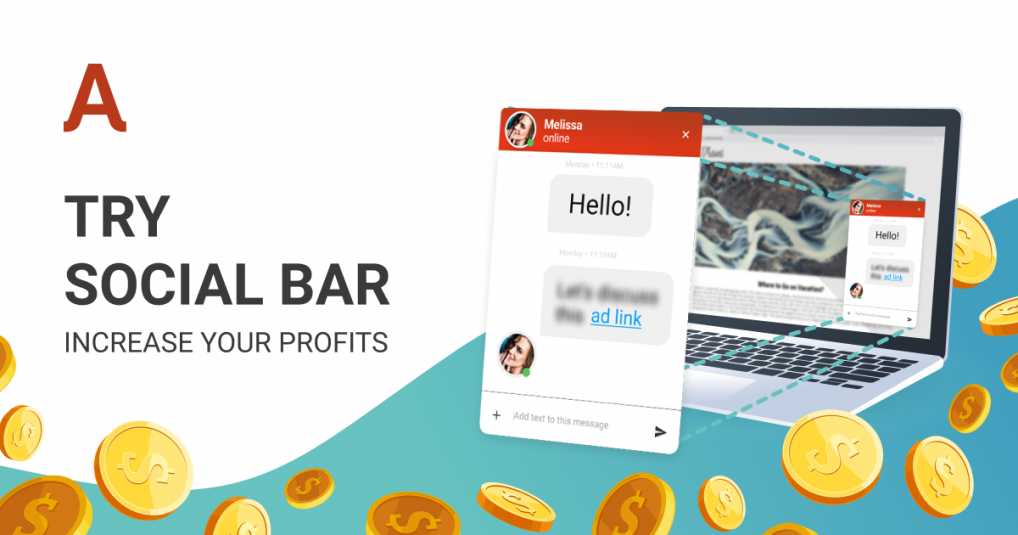 Why you should try Social Bar:
We have a great guide for advertisers to launch a hassle-free Social Bar campaign. Check it out

YCM8VNKE. Promo code is expired.can you give me a new code? 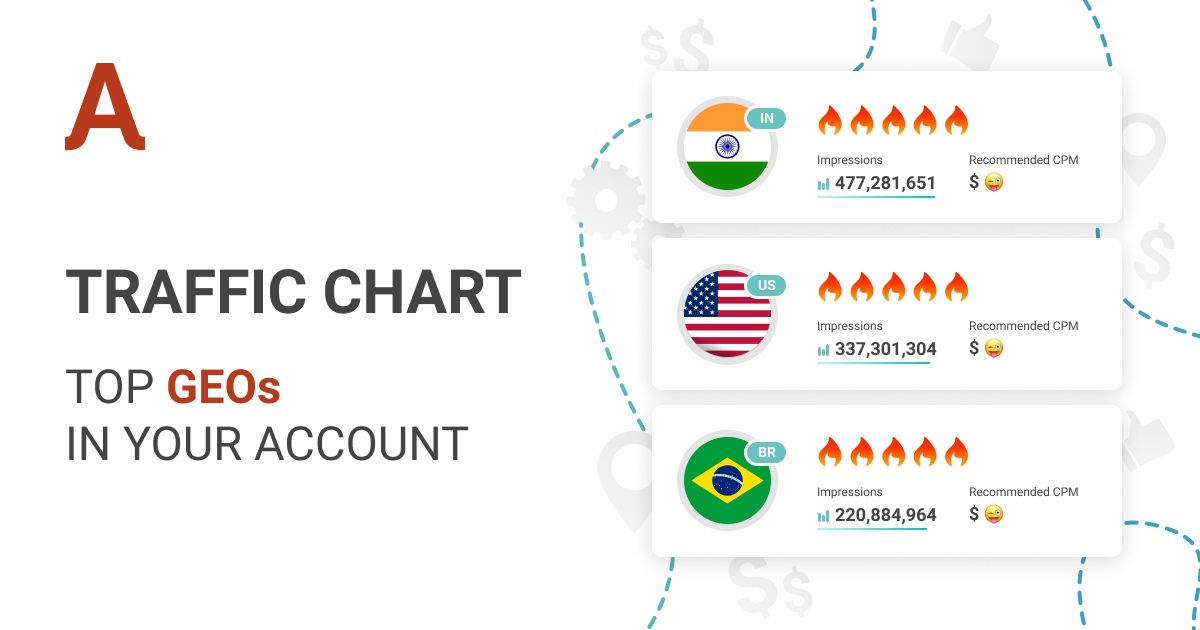 Top traffic GEOs are available for all advertisers. Now you can explore average daily volumes for any geo and target in seconds.
You can evaluate the statistics for the top ad formats:
Core benefits of Traffic Chart:
Join now!

I'd like to try @Adsterra , is there any promo now ?

Hello @Adsterra, I'd like to try!
Is there any promo ?

Hi everyone! We’re happy to share with you our partner’s experience in working on Social Bar - a brand new ad format by Adsterra. Also, expect some hot tips and tricks to make this ad format your next best gainful tool. It’s going to be quite a detailed study, so prepare for some long read Let’s start!


DISCLAIMER​
The opinions expressed in this case are those of the author. They do not purport to reflect the opinions or views of the Adsterra or its members.

I chose the offer from the N website and decided to send In traffic. On Adsterra website you may see the verticals with proven high performance for Social Bar:

Screenshot of the final landing page:

I’ve started with SSP-platform and chose the CPC model. In my opinion, it’s the best option to work on with a new ad format. During the tests I figured out CPC works better than CPV, but anyway I strongly recommend you do your own tests to make sure the offer works well for you.
Since this offer targets mobile devices, I blacklisted all the versions of Android OS, which are too old to download the app. There are tons of cheap IN traffic, thus I decided to set min price - $0.001 per click.
A little hint: target Hindi language - most of the Indian population speak it. Also, you can make one more campaign with the English language target set and compare the performance of the two campaigns later.

Let’s take a closer look at the Social Bar. It is an In-Page Push notification that can be mistaken for a system one. Forewarning: misleading creatives with virus alerts are strictly forbidden! You need to find something less aggressive but motivating. By the way, my creatives were approved on a second try because I’ve selected rather aggressive creatives at first.

Let’s start from the pre-landing page. Everything here is quite typical: instead of virus alert, we put something like “Your phone’s memory is full of files not in use. To improve your phone performance and to save your battery charge please download our utility/cleaner/antivirus”. Believe me, it’s more than enough.
Add sound and gleaming call to action to make your preland more flamboyant and potent. My previous campaigns gained performance points when I added an alert on the preland.
The next step is purchasing a domain. I’ve got the one having “androidbooster” in the domain’s URL. As better and more clear the domain name is - as higher the CR. No one would click on the “Download” button if you’d have a domain name made of numbers or a messy set of numbers and letters.

As you can see it is an ordinary preland describing the benefits of installing the utility. It’s important to make the description logical and consequential so the banner and preland look trusted and engaging enough for an upcoming install.

All the prelands which look like system notification would work out for you, but it’s important not to push it too far. here are some preland examples suitable for utilities, VPN and antivirus offers:

And so on. Remember: the contents of the banner, pre-landing, and final landing should be logically connected. Mind your creatives being as less aggressive as possible.

The next step is to create a notification. I used the images connected to the preland to avoid a possible misunderstanding from the user’s side at the very beginning. You can see an example of my Social Bar below:

The approach is the same as for push ads: finding a proper title and description to attract the user’s attention and to provoke him to click on the banner, and adding motivational creatives to make a sense of the process’ importance and serve as another motivation for the click.

It is essential to follow the rules of the platform and don’t put the logo of Android, Google, etc. since your campaign might be declined because of it, and you’ll have to look for new creatives.

My advice is to work hard on title and description. For instance, in India people in each state speak several languages. To cover all the India launch two campaigns - one in English and another in Hindi.

Save your battery time


This combination will be a 100% catch! Everyone hates when the battery goes down and the phone is slow.

Don’t scare the user too much. Remember: aggressive mislead creatives are forbidden for Social Bar as well!

I underestimated Social Bar, and it was my first mistake. I thought it’s something similar to PropellerAds’ In-Page Push ads, but fortunately, it turned out to be one of the most effective ways to send traffic.

ALWAYS set campaign limits for ad formats like this one. During the first day, I received an incredible 30.000 clicks! it’s a bit too much for the start. Luckily the bid was low and I’ve spent around $30 only. I decided to set a $40 daily limit to spread my budget on several days.

Always blacklist low-performing placements! Use the tracker and permanently blacklist isps of Amazon, Digital Ocean, etc. Thus you’ll save yourself from bot traffic, fraud, and other “joie de vivre”.

If during the test you’ll see some low performing creatives, whatever the reason is, don’t hesitate and change it! Whether it is a banner or a preland, put an extra effort to look for new solutions! I’ve tested around 10 creatives to find the ones with proper performance. For instance, pics with changed Android/Google names described above would work great for Android utilities.

Screenshot of the final campaign settings:

Total spent at Adsterra for all the days of the test: $421
Screenshot from the tracker:

Conclusion
In this case study I described some benefits of a new ad format. I just fell in love with Social Bar, and I want more! Feeling myself like a toddler in a toy store - such a broad variety of various creatives combinations is a pure joy! Besides, it has a direct influence on an ad campaign’ results - I’ve never expected such blasting results from the very first test campaign.
The result depends directly on your craft and imagination. Boldly choose utilities for countries recommended by Adsterra and launch the traffic stream while the competitors are yet looking another way.

In my next case study I’ll tell you about managed Social Bar campaigns and why crossing the gross baseline of $100 is just essential. See you soon!
Last edited: Nov 6, 2020

Thank you for the interesting case study. I'm seeing the same CTR as @servandosilva told.
But I didn't find the offer at a PO of $0.07. Best PO (OfferVault) is $0.02.

MattHead said:
Thank you for the interesting case study. I'm seeing the same CTR as @servandosilva told.
But I didn't find the offer at a PO of $0.07. Best PO (OfferVault) is $0.02.
Click to expand... Meet and greet our partner Affmy — a direct advertiser and a CPA network.
They have lots of excellent dating offers, which convert well

What you will get with Affmy:

By the way, they will be able to provide you with custom promo-materials and pre-landers specifically made for the Adsterra platform. 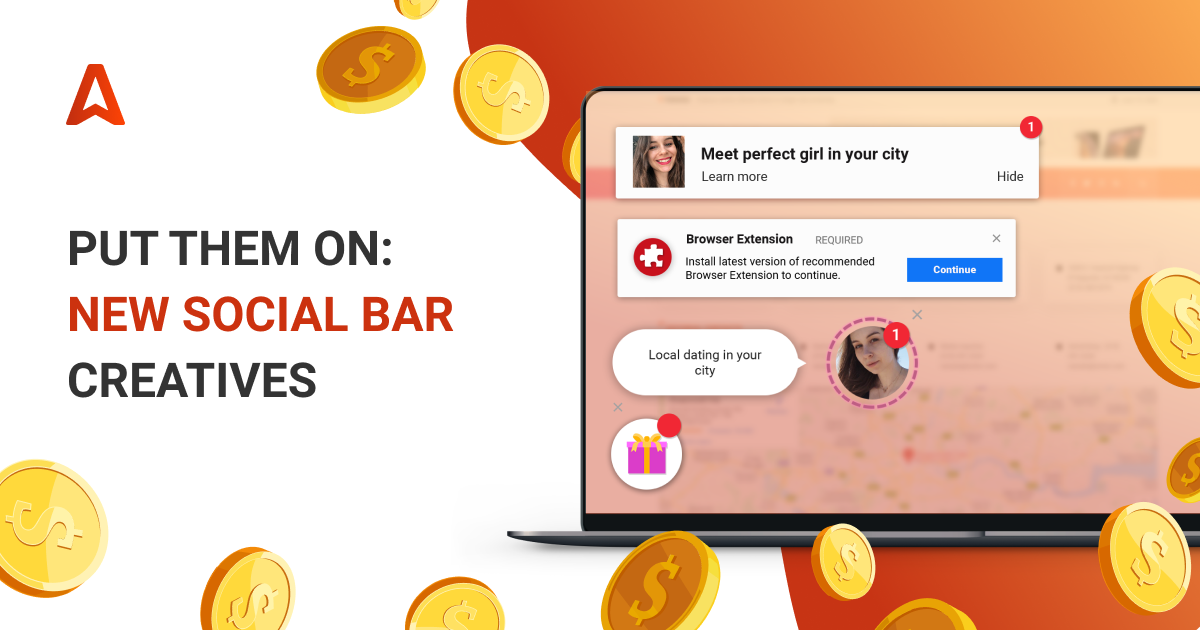 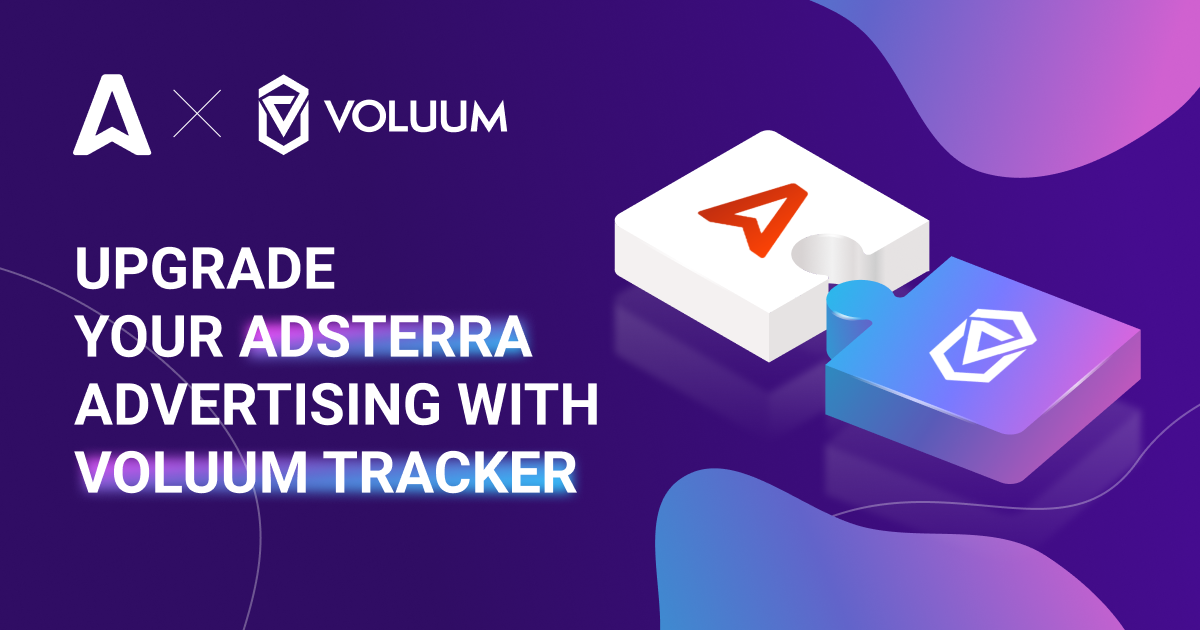 Every successful affiliate needs the right ad tracker.
That’s why you should try one of the best in the industry — our partner Voluum!
Synchronize cost and manage your Adsterra campaigns without leaving your tracker

Check out 4 advanced tracking use cases you can’t ignore!
And find your special bonus in the end of this integration manual 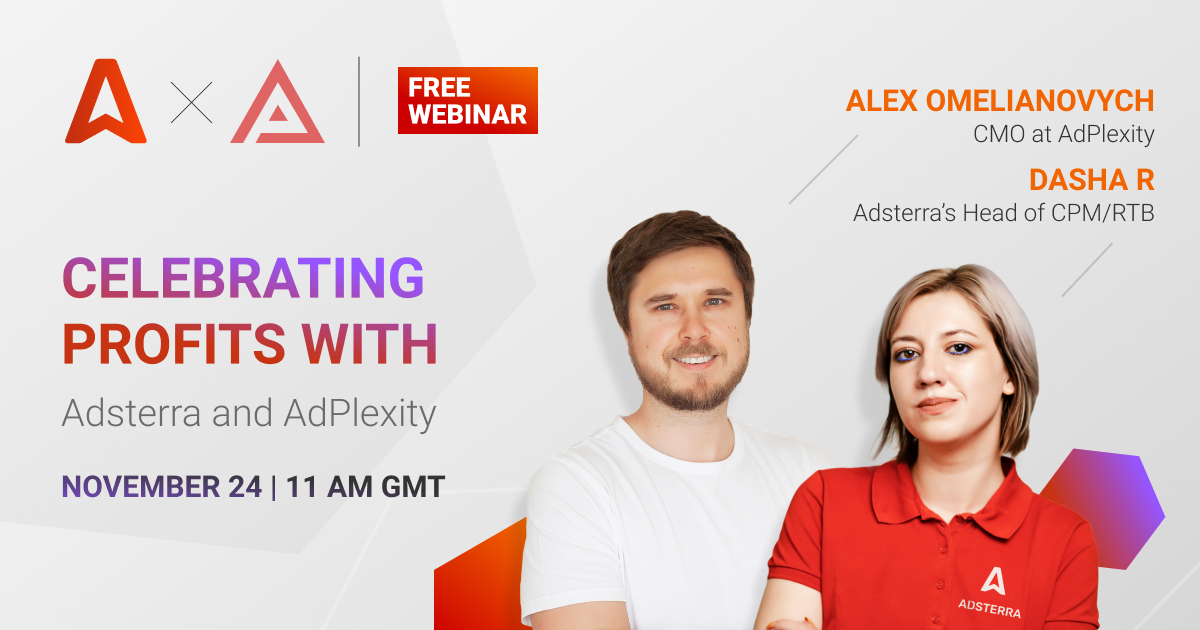 Two speakers with hands-on expertise, Dasha from Adsterra and Alex from AdPlexity, will walk you through a successful goodbye-2020 campaign planning, running, and optimization:

Valuable gifts for our guests

Hurry up and register 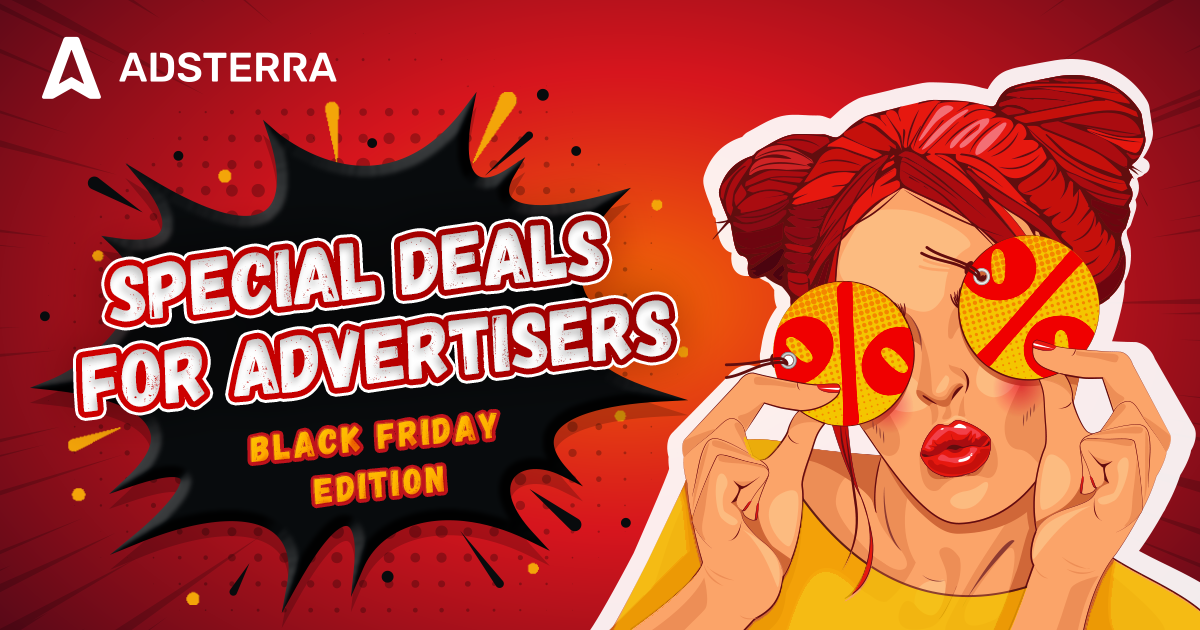 We couldn't leave you without nothing to relish on Black Friday

Make sure to share with your friends since the promo codes are valid...All year round for community bros!

How to apply in 3 easy steps:

1. Sign up with Adsterra as an advertiser
2. Go to Finance, enter your promo code in the activation field then top up your balance
3. Get a bonus automatically and launch campaigns!

This works only for new users? any promo code for existing users?

harihrn said:
This works only for new users? any promo code for existing users?
Click to expand...

Yeap, for new users only

If you launch CPA campaigns, you can't miss the moment — enormous volumes of mobile and desktop traffic with low competition are here:

Gain the highest ROI than ever!
Hurry up to run your pop campaign while it's hot!

Great news for all Adsterra Self-Serve Platform users. You can now enjoy the highest CTRs while paying only for conversions. CPA pricing for Social Bar (In-Page Push) is here, in your account.


Hit Campaigns → Create. Simply pick CPA from the Pricing type dropdown and set up your targeting. Save up on clicks that don't return you leads and sales!

Did you get the chance to hear about Vortex Alpha Affiliate Network?