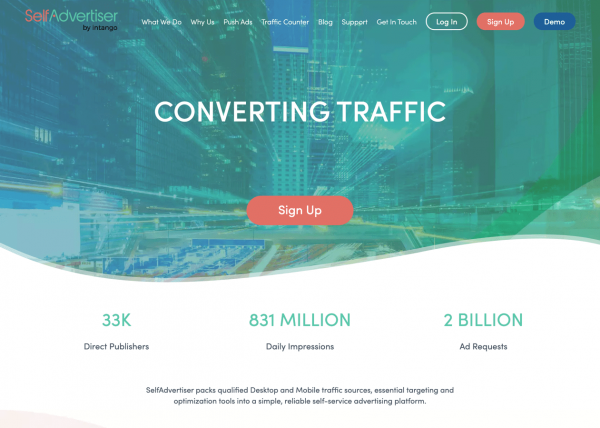 https://selfadvertiser.com/
If you are looking for a source for pop or redirect traffic but want one whose majority of traffic comes from their own direct publishers, then SelfAdvertiser would be a great choice.

SelfAdvertiser is actually a division of Intango (formerly MyAdwise), which is a media technology company established in 2008. SelfAdvertiser itself was built in 2014 and works primarily on Pay Per View type of traffic.

There are many features that make SelfAdvertiser unique and a great PPV traffic sources, but here are a few that stand out.

SelfAdvertiser boasts of sending more than 830 million views every day. It also receives more than two billion ad requests from its direct and third-party publishers. This traffic is worldwide, so you won’t have a problem advertising to any country in Tier 1, Tier 2 or Tier 3 regions.

While other providers rely on DSPs and other supply platforms for their traffic, SelfAdvertiser gets a bulk of its traffic from publishers directly under their wing, through their publisher platform called RevenueHits. This supplies them more than 33,000 publishers from around the world.

As their name implies, SelfAdvertiser’s platform is self-service. This is great news for those who want to be hands-on with their campaigns. If there are any adjustments that you want to be done on your campaigns immediately, you can easily do so. The adjustments are done and available in real-time.

They offer two types of PPV traffic and these are as follows:

Have you ever experienced mistyping a domain name and suddenly you arrive at a website that is not exactly what you desire but of a related niche? This is called zero-click redirect because the user would not notice any redirect happening, and there is no need for them click on anything for the redirect process to start.

This type of traffic is highly converting when used properly as the user typically has buying intent. SelfAdvertiser has tons of parked and expired domains under their wing, for which they utilize zero redirects.

This is the most popular type of PPV traffic wherein the ad opens up a page in a separate browser (or tab, in the case of mobile phones and tablets). The user will be able to see the ad when he or she closes his current window. This is less aggressive than pop-overs, making it still viewer-friendly.

Keyword and Run of Network Targeting

While some PPV platforms offer only category targeting, SelfAdvertiser lets you target websites by keyword. This allows you to whitelist the keywords or even the domain name of the websites where you want your ads to show.

The Run of Network traffic, on the other hand, allows you to drive huge volumes of traffic to your ad. Based on the results of your campaign, you can then filter and blacklist the source IDs that are not profitable, or you can create a new campaign whitelisting the source IDs you want to continue receiving traffic from.

SelfAdvertiser's Keyword Tool is a powerful instrument at finding keywords and domain names that match your ad. This tool is available inside the campaign creation stage. Once you input your target keyword, the table will show multiple results, with the first one being your keyword. The keywords can be arranged alphabetically, based on traffic volume, or based on the Average Cost per View. You can choose to add selected keywords or the top 100 keywords (based on traffic volume).

Bulk adding keywords can also be done, with broad match and exact match options. However, if you are using Domain Redirect traffic, make sure to use the actual word you are targeting and not your assumed misspelling. For example, when targeting the word "target", use that word instead of a possible misspelled word, such as Tagret.

If optimizing multiple campaigns every single day is a tedious task for you, use SelfAdvertiser's Auto-Optimizer. As its name implies, this tool will optimize your campaign by pausing sources that are not profitable and bidding more for the ones that are converting. The Auto-Optimizer will bid higher based on your Core Bid (the initial bid) topped with the Multiplier (the maximum you want the AI to bid for you).

This tool will only work if you have a CPA Goal, which is the ideal amount you want each conversion you receive to cost. It is necessary to install a pixel in order for the optimizer to track conversions.

There are four types of statuses that can appear next to a source once the campaign starts running. These are:
The steps to creating an Auto-Optimizer campaign are similar to creating a regular campaign. All you need to do is click on the Bid Optimizer box during campaign creation, and indicate your Core Bid, Multiplier and CPA Goal. The only difference is that in Auto-Optimizer, you can only target one geolocation.

The minimum deposit for first-time payments is $100. Once the first payment is done, the next payments can be done at a minimum of $50. As for the campaigns, the minimum daily budget is $10.

Use our exclusive SelfAdvertiser promo code to get a $50 bonus on your first deposit! Just apply the promo code when you are funding your first campaign.

Sometimes they lack volume and there's some bot traffic on PPV, but nothing to worry about if you compare it against other networks.
View more